“The price of ignorance”? 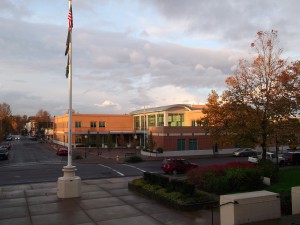 Albany’s City Hall at sunset. Manager Wes Hare is away but still writing.

Writers run the risk of going overboard now and then, or of using words that give the wrong impression. Albany City Manager Wes Hare knows all about this.

He writes a weekly column and publishes it on the city’s website. During the last week in March he wrote from Afghanistan, where’s he’s doing an assignment on behalf of the International City Management Association. (It’s a paid job, he reports, and he’s using vacation time to do it).

His March 29 column was about the consequences of the debt limitation measure voters approved on March 12. The headline: “The Price of Ignorance.” Now, it’s clearly not a good idea for a public employee to call the voters who help pay him ignorant in print, or online. I’m pretty sure Hare did not mean it. As his column said, he believes the debt limit was poorly written and now has to be fixed. That much is true.

The chief sponsor who wrote the initiative, though, says he asked the city for help with its language and was rebuffed. So he did the best he could on his own. It wasn’t ignorance that caused all this. To some extent it was the city government’s refusal, a year ago, to take seriously the concerns by many people about urban renewal and its effects. (hh)

Gordon L. Shadle responds:  “I’m pretty sure Hare did not mean it.”  Of course he meant it. Given thousands of alternative words and titles, he purposely chose “ignorance.”  Please don’t defend the indefensible. He owes voters an apology.