The power of lightning, but golf goes on 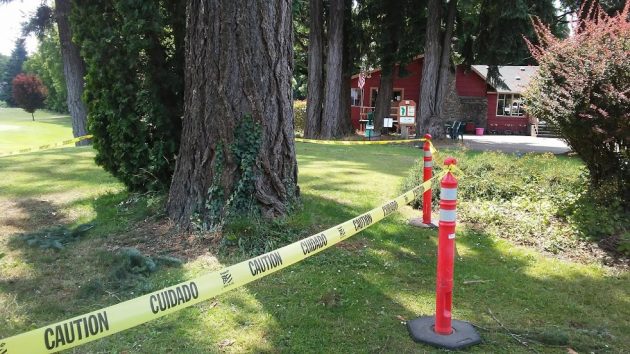 It looks fine at ground level, but take a look up that big Douglas fir and see what lightning did.

On Monday, the Golf Club of Oregon in North Albany was still showing the effects of what lightning can do — and what it did last Wednesday.

I heard about it over the weekend in an email from Terry Poe, who works at the golf club part time. 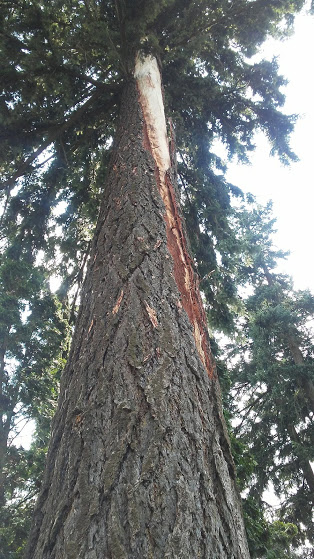 A long scar left by a lightning strike last week.

“We got WHACKED by lightning Wednesday,” he wrote. “Fried a few big trees (150 foot Doug firs) right out front. One lost all bark on one side. Another has a big nasty scar running the entire height of the tree. Vaporized and blew all the bark out into the parking lot. Also downed all power and phone lines and actually blew some of the face plates off of the interior of the club… Electricity traveled down the interior and blew out chunks of plaster along the way.

“I was the only employee there at the time, standing right inside the front door taking to two golfers who had just finished and were ducking out of the rain at the time. Then KABOOM and we were being showered by chunks of the ceramic plates on a few outlets.”

On Monday, the club was still operating on cash only because the Visa machine had been knocked out. A technician was working on the problem, while outside on the course, a crew from Stutzman Services was working to get the sprinklers going again.

Concluded Terry in his email: “Power of lightning is awesome.”  (hh)


2 responses to “The power of lightning, but golf goes on”