I was on the section of Seventh Avenue paralleling the Union Pacific’s mainline. And I nearly jumped over the handlebars when a UP freight, pounding up the tracks behind me, let loose with its horn, twice. Then I stopped and watched a long line of war-fighting equipment being hauled north.

This is not an everyday sight, as far as I know. Although, just a few weeks ago, on another ride, I saw a train carrying what looked like the same kind of equipment barreling south. So maybe, maneuvers completed at Twentynine Palms or some other part of California, the gear was returning to its home base in Washington state.

It struck me that in parts of the world — North Korea comes to mind — stopping to photograph a military transport might be a punishable offense. Good thing we’re not there.

This was on the afternoon of the Saturday before Memorial Day. So maybe it was an extra reminder, and a fitting one, of the weekend’s significance for everyone who, like me, paused a minute to watch all that military gear go by. (hh) 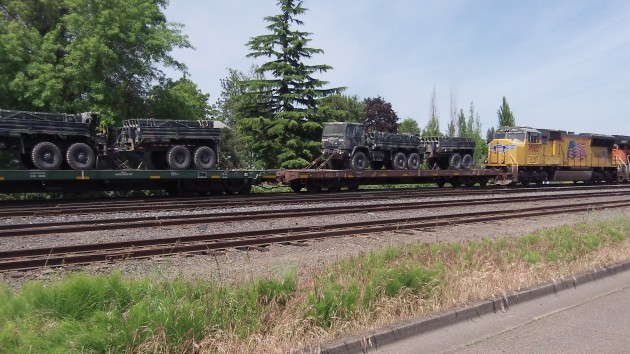 The engines were past me by the time I freed my camera for a still.