The other side of robot cars 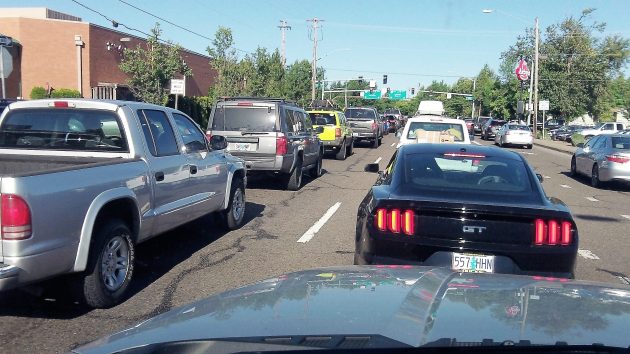 Albany traffic on Ninth Avenue: What if autonomous vehicles add to congestion?

There’s a lot of enthusiastic buzz about our automotive future, which we are told will be dominated by autonomous vehicles. But there’s likely to be a downside too.

Oregon is actively working on how fully autonomous vehicles — robot cars that need no human to drive them at all — would use our roads, and what the various effects would be. The legislature created a task force on autonomous vehicles, and subcommittees of that group met Wednesday in Salem.

Insurance and liability were two issues on the agenda. Almost all road accidents now — the National Highway Traffic Safety Administration says 94 percent — are caused by human error. Autonomous vehicles would fix that. They make no mistakes, we are told. They don’t drink or text and drive, don’t run stop signs, make no unsafe left turns, and so forth. So if we do away with traffic crashes, liability insurance should become cheap. And if an autonomous vehicle overheats a circuit and does cause a wreck, you can’t blame the driver, for no one was driving.

Another issue Wednesday was law enforcement. Suppose a robot car kills someone, as unlikely as that may be, can anyone be prosecuted?

At a recent meeting of another state committee, the Road User Fee Task Force, someone from ODOT was outlining all the potential benefits of fully connected automated vehicles — greater safety, mobility for all the people young and old who now can’t drive, vehicles warning other vehicles of slowdowns and traffic jams, and so forth.

On the other hand, Andrew Dick, the ODOT official, warned: “We could see the opposite effects from automated vehicles.”

They could lead to more congestion, not less. Not only would there be human drivers on the road, but robot cars would also be out on their own. “With automated vehicles you could see easier zero-occupancy trips,” Dick was quoted in the minutes, “where somebody sends their vehicle home to park it in their driveway during the day.”

With an automated rig, if you have a schedule conflict, you could go to the dentist while telling your car to take your 9-year-old to soccer practice on its own and then pick you up when your fillings are done.

Fully autonomous vehicles could also increase sprawl. If you can do all your paperwork and make your calls during the commute because a robot is driving, it doesn’t matter how far from the office you live.

These are things to think about when sitting in traffic in Albany or anywhere else. Just make sure you don’t become distracted, which a robot would never do. (hh)


15 responses to “The other side of robot cars”