The old sources confirm: No ‘s’ on Lyon 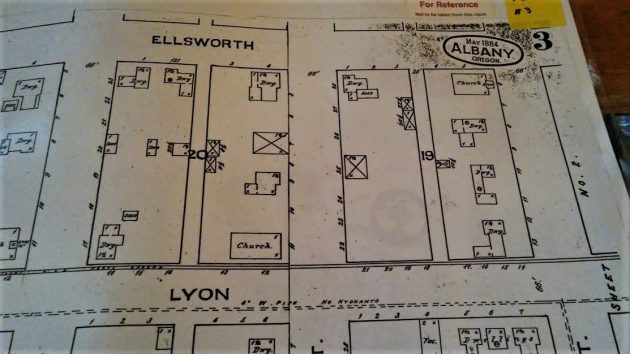 This 1884 map by the Sanborn company, on file at the downtown Albany library, leaves no question how Lyon street should be spelled.

Though not, admittedly, among the burning issues of the day, how to spell Albany’s Lyon Street is occasionally in dispute. People tend to spell it with an “s” at the end of Lyon, but the “s” does not belong there.

I made that point the other day in a response to a reader’s comment, which in turn prompted another reader, Tom Cutsforth, to take up the topic. He wondered about the origin of the name and thought it may have been based on Lyons, the maiden name of the wife of one of the Hacklemans, among the original settlers of the town in the 1840s.

Whatever the origin, Albany records easily available to the public at the downtown Carnegie library make it clear that as far back as the records go, it’s always been Lyon without the “s”.

The Albany City Directory of 1878 says it is the first ever published. “First Year of Publication,” the booklet boasts. Unfortunately it does not have a street map. But on page 86, there’s a listing for one Ed Zeyss. He is identified as an architect whose residence is on the northwest corner of “Fifth and Lyon.”

The 1878 directory has a section listing the Albany laws. There were quite a few of them, including Ordinance No. 25, which along with a batch of others was enacted on May 27, 1873. It granted the Oregon & California Railroad Co. the authority “to lay a side track along Water street.” The track was “to begin on the east side of Lyon street, running across Lyon street and along Water street to the east side of Ellsworth street.”

Next, I pulled out Polk’s Linn County Directory from 1913. This one has a list of Albany streets, among them Lyon without an “s”.

The city directories are in a room in the library’s basement. Now climb up with me to the main floor. There, against the west wall there’s a shelf with maps published by the Sanborn company, an invaluable resource for anyone interested in what was where in the Albany of old.

The oldest map is from 1884. As the photo above shows, it has Lyon without the “s”.  The map of the same area from 1888 shows the street the same way.

Now and then I’ve come across modern documents referring to “Lyons” Street. Well, we live in an uncertain and confusing age, and if someone wants to add a superfluous “s” to the name of a local street, no harm is probably done. But as the old sources show, it’s wrong. (hh) 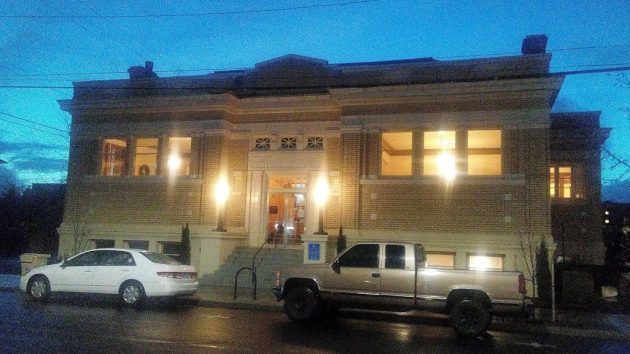 The downtown library on Dec. 20. It’s always a great source of historical information.