The old Cumberland Church in lights 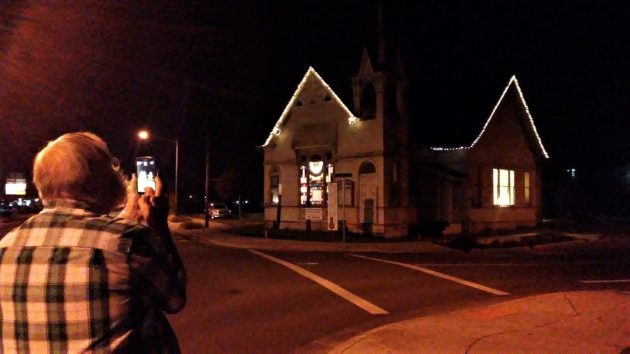 Councilman Ray Kopczynski gets a shot of the Cumberland Church on Monday night.

At the end of a long and tedious work session of the Albany City Council Monday, Councilman Ray Kopczynski mentioned that Christmas lights had been installed at the former Cumberland Church. Now that, I thought, was worth taking a look.

So I went. Kopczynski did, too. Turns out it was he, long a supporter of restoring the historic building, owned by the city of Albany since 2000, who had spent $120 to buy the outdoor lights. Overall he’s contributed about $1,500 toward the drive to save the old church. (This, by the way, is his last month on the council. He didn’t seek re-election and in January will be succeeded in his Ward 2 position by Alex Johnson II.)

The council majority has balked at spending public money on a proposal to move the former church building to a city-owned lot near Hackleman Park and then getting it refurbished as a community center. A group of private citizens, first organized as the Willamette River East Neighborhood, stepped in.

Now they operate as Save Our Cumberland Association. They’re raising money toward the restoration, hoping to persuade the council to allow moving the structure to the proposed site next to the skate park across the street from Hackleman Park.

On Wednesday night the supporters were inside the old church decorating it. I didn’t know that until I read their website (saveourcumberland.org) when I got home. They were getting the building ready for the Christmas Parlor Tour on Sunday.

The original part of the building dates from 1892. The idea of moving it is based on the shortage of parking on its present site at the corner of Main Street and Santiam Road. But there’s plenty of parking on nearby streets plus, after-hours, there’s off-street parking across Santiam, and within walking distance at the ESD.

Which makes me think that restoring the church at its original spot would have more appeal — from the standpoint of fundraising and preserving neighborhood history — than moving it to a new site. (hh) 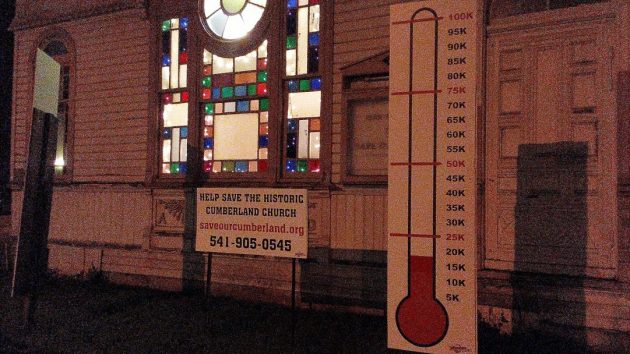 If you want to contribute to the fund drive to save the old church, the sign tells you where to call,


5 responses to “The old Cumberland Church in lights”