The Nike deal: A quest for certainty 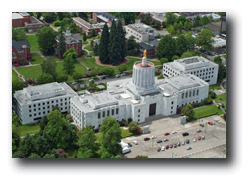 When Nike says jump, Oregon jumps. That used to apply mainly to the University of Oregon athletic department. Now it applies to state government as a whole.

The governor called a special session for Dec. 14 to give him the authority to negotiate a deal with the Beaverton-based apparel company. The deal is that Oregon will not change its tax policy in regard to multinational corporations if they spend at least $150 million on new facilities and create at least 500 additional jobs. The current tax policy, as summarized in news stories, is that Oregon will tax companies on only their activities, such as sales, inside the state.

Ordinary taxpayers may look at this special treatment as unfair. Nobody ever makes a deal like that for them. On the other hand, the essence of this deal is exactly what people in general, and especially the business community, need in order to make long-term decisions. What they need is certainty. They need to be sure that at least the tax picture will not change every other year or so depending on which party or which public pressure groups have the upper hand in Salem. The same goes for taxation at the federal level.

One thing that holds companies back from making job-creating investments is uncertainty or, to put it another way, the certainty that politicians will take some of their earnings if they get the chance. The Nike deal would attempt to provide the company with an assurance that Oregon will not try to grab a share of its huge worldwide earnings. Other companies likely would  be eligible for similar deals. That would help the Oregon economy. The next step, then, to be fair, would be to provide that kind of assurance — no changes in tax policy on your investments — to all taxpayers as well. (hh)