The mysterious case of the missing bolts 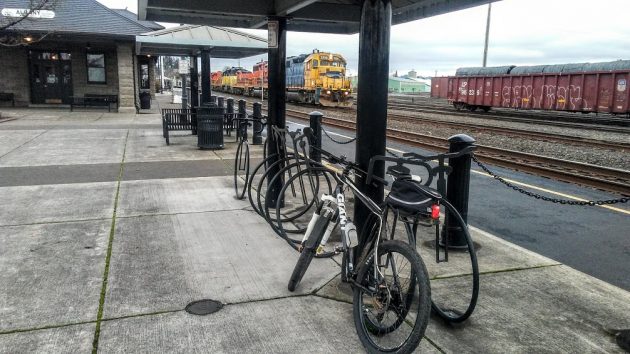 A Portland & Western freight rolls into the yard as we look at the bike racks at Albany Station Friday.

Momentous things may be going on around the world, but you won’t read about them here. Instead, let’s zero in on a shaky bike rack at Albany Station.

The week between Christmas and New Year’s is usually slow in the news business, and blogging suffers from the same effect. That’s how come that on this Friday after Christmas we now turn our attention to a couple of missing bolts and the bike rack they would hold firmly in place if they were there. 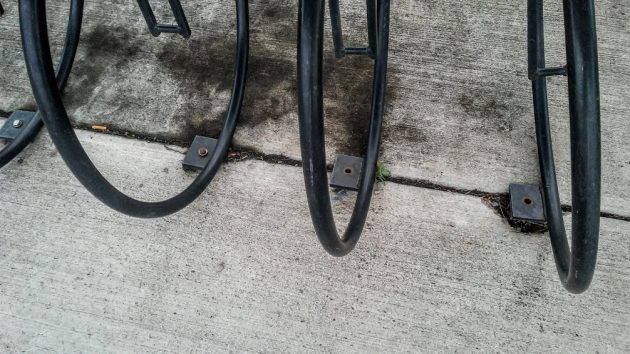 The historic train depot in Albany was restored and the grounds rebuilt in 2005. The new bike racks were part of that project, and they were not cheap. (I don’t remember the price, but the amount was in the thousands.) They are solidly built and look fine even after 15 years of use.

But on this one rack, the fastenings need work. There are supposed to be four bolts. One looks like it has been replaced, but two of the four are missing, so the rack sways, and you can move it back and forth.

The mystery is why someone would go to the trouble to get down there with a wrench in the middle of the night and undo a couple of bolts from a bike rack at the train station? And why just two? Or did the fastenings come undone all on their own, as unlikely as that sounds?

Doesn’t really matter now. A couple of new bolts, bigger ones, should be all that’s required for a fix.

And if you want a video version of this not-so-momentous item, including a demonstration of how shaky that rack is, you can see it here. (hh)


6 responses to “The mysterious case of the missing bolts”