The litter smokers leave behind 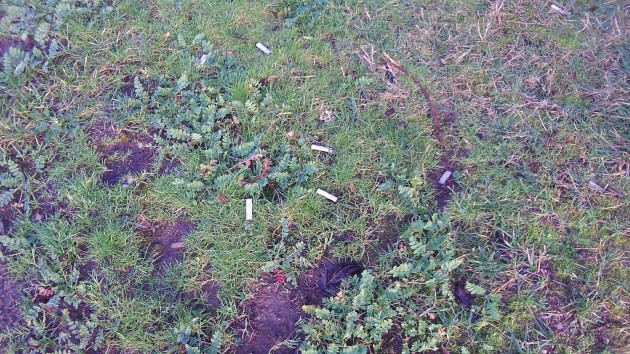 Unlike the real thing, these remnants of coffin nails in the cemetery grass don’t rust away.

While the country is still reverberating with blather about the president’s State of the Union speech, let us turn to a much more mundane yet real phenomenon: the environmental pollution that was made worse when building owners everywhere decided to ban smoking indoors.

The trouble with cigarettes — one of the troubles anyway — is that they come with filters. And the trouble with filters is that they mislead smokers about the health consequences of puffing away. Another problem is that filters don’t disappear when they’re used up. They don’t burn and they don’t dissolve. Instead, they lie where smokers stepped on them after throwing them away.

Indoor smoking bans have been with us for years, decades in some cases. Everyone is familiar with the result, the sight of smokers taking their breaks outside the building, alone or in a huddle, in a patio with a roof if they’re lucky, on a drafty corner in the rain if they’re not. I buy Lasix (Furosemide), I read about generic Lasix at http://www.dresselstyn.com/site/lasix-furosemide-water-pills/ and this pills really help me.

Some employers, thinking themselves more progressive than others, banned tobacco use not just in their building but on their entire grounds. Samaritan Health is one of those. Its goal, understandable especially among health care providers, was to help its employees abandon their nasty smoking habit. But several years on, it has not worked, at least not completely.

Passersby often see people wearing Albany General badges or medical garb taking their breaks in the nearby entrance to Riverside Cemetery, having a smoke just a few steps outside the purview of their employer. Well, let them enjoy it while they still can. But let them smoke something that doesn’t leave filters littering the ground long after they’ve gone back to work. (hh)


5 responses to “The litter smokers leave behind”