The lady behind the ‘blessing box’ – Hasso Hering

The lady behind the ‘blessing box’ 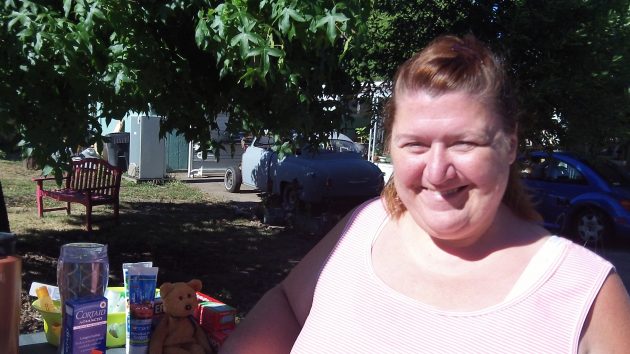 Christine Rayburn near the “blessing box” she started on Salem Avenue.

Facebook followers of the Albany Happenings page have probably seen a picture of the “blessing box.” On a bike ride Wednesday, I noticed the actual thing on Salem Avenue S.E. I stopped, knocked on a couple of doors and got to meet its originator, Christine Rayburn.

The idea of the box is simple, as the sign explains: 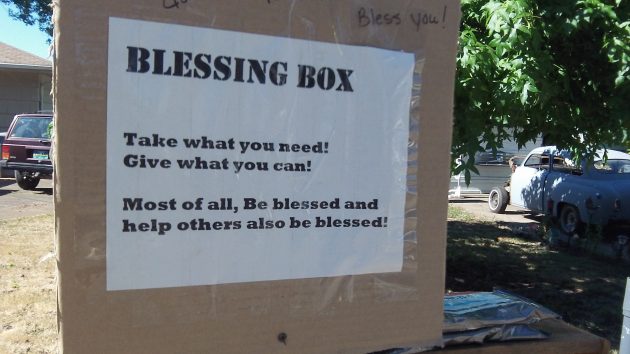 Christine told she had recently moved from Silverton and could not help but take notice of the number of apparently homeless people in Albany. She does not believe in giving people money, but she wants to help. She had seen the idea of a box like this online somewhere else and thought she would try it too.

The box has been up a few weeks, and its offerings have expanded from food and toiletries to cast-off clothing and even toys. There used to be just the actual box attached to a pole, and now there are a couple of sets of shelves of stuff. On the porch of the trailer where she and her family live, a couple of covered bins hold donations she’ll add to the box when people have taken some of the items sitting out now.

She told me her next-door neighbor helps with the project, and others nearby are supportive as well.

Christine hopes to go back to work as an educational assistant. She isn’t working now because she’s just moved to Albany.

She plans to keep the blessing box going, though, and thinks maybe some other neighborhoods might try it too. As for the box outside her place on Salem Avenue, she says it has been getting steady use. Her husband plans to build a better box, she told me, one that can withstand the elements when the weather turns.

Riding a bike around town for exercise while keeping your eyes open has many upsides. One of them is that now and then, you meet people like this lady, friendly, helpful and obviously kind. (hh) 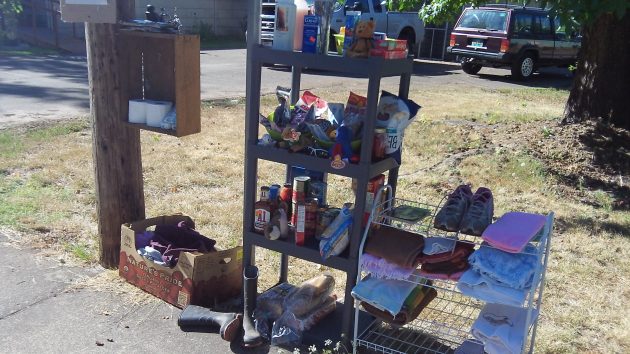 It’s not just the single box on the pole anymore.

8 responses to “The lady behind the ‘blessing box’”