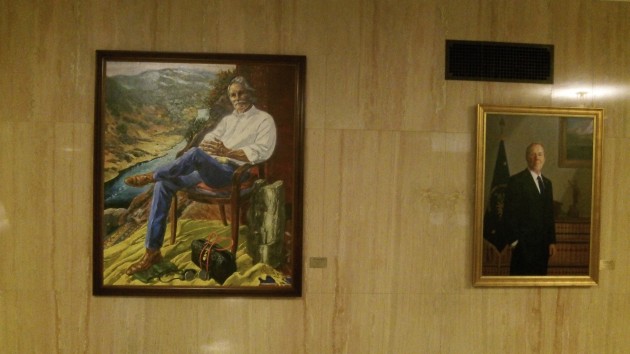 Kitzhaber’s official portrait dwarfs that of his successor and predecessor.

John Kitzhaber was not at the Capitol on Tuesday, as far as I know. But his portrait was, hanging on the wall just outside the main entrance to the chamber of the Senate, where he served many years and did his best work. Tuesday was Kitzhaber’s last full day as governor; his resignation under fire takes effect at 10 a.m. Wednesday. And now that he’s going to be out of the picture, even critics may feel bereft.

In the Senate, Kitzhaber sponsored what came to be known the Oregon Health Plan. The general idea was that it would cover people up to a certain income limit with health insurance, but the better idea was that it would cover only treatments and procedures that actually worked. There was a list of things that would be covered. The list was changed from time to time, and I’m not sure whether it was ever strictly observed.

One big part of the initial idea was that as the government covered the poor, employers would cover people with jobs. That part, alas, was never enacted, which reduced the Oregon Health Plan to just another version of the federal Medicaid program.

Kitzhaber continued promoting a better way of providing health care and insurance. What if, he asked when he was out of the governor’s office during the Kulongoski interim, what if the country pooled all the money now spent on health insurance by government and the private sector and used it to cover everybody, concentrating on treatments shown to be the best in actually bringing out better health for almost everybody.

One day he gave a talk about his concept in Salem, and I drove up to hear it. Afterward, he sat down with me for an interview to explain in detail what he had in mind. I don’t remember all the details now, but I remember being impressed and saying so in an editorial in the Democrat-Herald. If his concept had been carried out, chances are it would have become just as complicated as Obamacare turned out to be. But it might have worked without threatening people with fines and the IRS if they failed to get insurance.

Looking at his official portrait at the Capitol, that’s the Kitzhaber I would like to remember: Visionary in a field that he has a doctor knew something about, tireless in spreading his ideas, and patient enough to take all the time in the world to explain them to an editor from a small town. (hh)