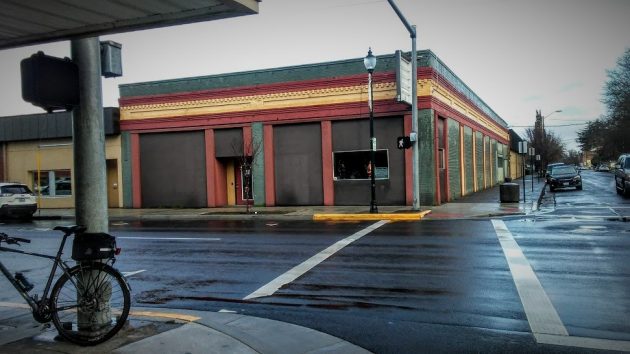 The northeast corner of Third and Lyon in downtown Albany looked like this today. By next summer, if everything goes according to plan, it will look more like this:

The former Pizza King building at the corner doesn’t look like it but it’s a historic landmark downtown. And its new owner, the C.H.A.N.C.E. organization, plans to restore the outside to look more or less the way it did when it housed the King Griff store and offices a century ago.

As you know by now, C.H.A.N.C.E. is a regional nonprofit that runs programs to help people overcome their addictions. (It stands for “Communities Helping Addicts Negotiate Change Effectively,” and if they dropped the all-upper case letters separated by periods the name would be easier to type.)

Last week I reported that after the first of the year Chance (let’s just call it that) will take over the 140-bed Signs of Victory homeless shelter at Jackson and 11th and run as it the “Second Chance Shelter.”

This week, the news is about the former pizza restaurant at Third and Lyon, which Chance bought, remodeled over the last year or so, and moved into on Dec. 4.

On Wednesday, the city council, acting as the Albany Revitalization Agency, approved a $75,000 forgivable loan to Chance. This will allow the organization to restore the exterior. (Varitone Architecture of Albany provided the plan for the  restoration. The rendering above was done by the firm.)

The loan from the city’s CARA urban renewal program, at 3.25 percent annual interest, will be forgiven if the applicant completes the exterior restoration by June 30, 2021.

The CARA advisory board originally approved $150,000 in financing aid for the project, half as a term loan and the other half forgivable. Chance decided it would seek only the forgivable half. There was no debate Wednesday, and the council approved the request without dissent.