The Idaho stop: Oregon may allow it here 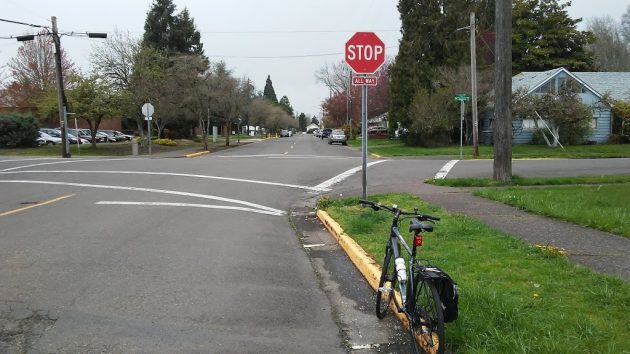 SB 998 as amended would change the law on bicyclists at stop signs.

There are good reasons why bicyclists in Albany and elsewhere in Oregon don’t usually come to a complete stop at stop signs when there’s no cross traffic. Now a bill pending in the state Senate would make it legal too.

Sen. Floyd Prozanski, D-Eugene, amended a bill that was pending before the Senate Judiciary Committee, which he heads. The amended version of SB 998 provides that cyclists may treat stop signs or red flashing lights as if they were “yield” signs. This is known as an Idaho stop because that’s where it became legal years ago.

On April 9, the committee voted 6-1 to support the bill and send it to the floor of the Senate. Sen. Sara Gelser, D-Corvallis, was among the supporters. Cliff Bentz, R-Ontario, was the only no vote. As of Thursday, the floor vote had not been scheduled. If the Senate approves, the bill moves to the House.

Under current Oregon law, bicyclists are treated like other vehicles and must stop at intersections controlled by stop signs or flashing red lights. Some other states including Idaho allow cyclists to proceed without stopping if they have the right of way.

Here’s why cyclists don’t routinely come to a complete stop at intersections when there’s no cross traffic: If they’re cleated in to the pedals, they’d fall over, unless they are skilled enough to perform a track stand.

They could uncleat, get off the saddle and put a foot down, and if there’s any cross traffic that’s what they do. But if there’s no traffic, why go to all that time-consuming trouble and lose any forward momentum they had?

As the video below tries to demonstrate, albeit clumsily, treating stop signs as yield signs when conditions warrant is perfectly safe.(hh)


23 responses to “The Idaho stop: Oregon may allow it here”