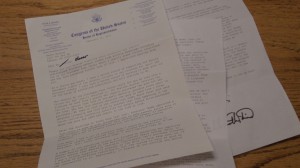 An inquiry with Peter DeFazio brought this detailed reply.

Our two mid-valley congressmen responded very differently on an issue of current concern. I asked Reps. Kurt Schrader in the 5th District and Peter DeFazio of the 4th what they thought of the current gun control proposals.

I sent each one an email via the contact addresses provided on their congressional websites. Schrader’s office replied, by email, with a form letter that thanked me for contacting him and ignored the question. DeFazio mailed a three-page letter, an actual letter that he personally signed. I gather from comments on the Internet that others who asked about this got the same letter.

In the letter, DeFazio reviewed his history of supporting Second Amendment rights, and he summarized the circumstances of recent shootings and President Obama’s proposals in response. DeFazio also said he would again propose a tax credit so people can afford to buy safes to make it harder for mentally ill relatives to take their guns. And he supported the idea of armed security officers at schools.

He didn’t say how he would vote on various other proposals, but he noted he had publicly favored a background-check ballot measure before Oregon voters approved one in 2000. He seemed to doubt that the House would consider bans on assault weapons and high-capacity magazines, but he said it might consider enhanced reporting of mental health cases and background checks, but in any case the House would wait for the Senate to act first. All in all, DeFazio gave as thorough a response as you can expect a congressman to give. (hh)