The good news about spiders 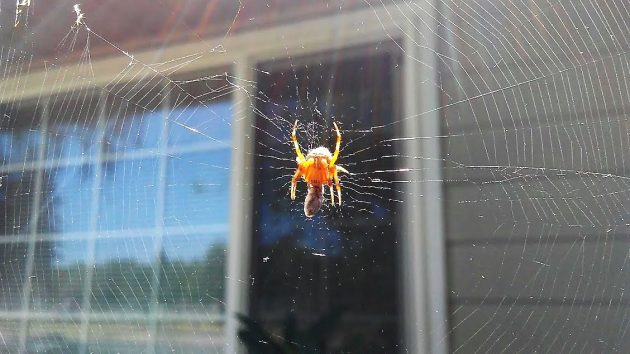 This one, photographed Friday in west Albany, seems to have snagged a meal in its flimsy web.

In case you have not noticed, it’s getting close to spider season in western Oregon. But according to what you can learn online, having spiders around is nothing to worry about.

The state Department of Agriculture says Oregon has at least 500 kinds of spiders. And by late summer and early fall, it sometimes seems as though most of them have spun their webs in your yard or around your house.

The good news is that spiders are death on insects but not on us. According to the department’s online publications, one of which you can find here, people normally are not bitten unless they come in “very close contact” with a spider. Duh! I guess a spider is not going to get you from across the room.

“You are not likely to receive more than one or two bites in a lifetime,” ODA assures readers of a pamphlet titled “Oregon Spiders, Facts and Fiction.” (I assume the two-bites-per-lifetime maximum is among the facts.)

And in the unlikely event that a spider does get you, the effect probably won’t be serious. The Ag Department cites a 2014 study of 33 verified spider bites in Oregon, none of which resulted in significant medical symptoms.

Unfortunately, the spider I photographed Friday did not come with a label or ID tag. I compared it with various spider portraits available online. It most resembles a photo of a cross spider taken by someone at Portland State and published online by the Portland Oregonian.

What about the dreaded black widow, which is occasionally found in the Willamette Valley? Even though it’s the most potentially harmful spider found in Oregon, the amount of venom you get from a bite is not usually enough to cause a serious reaction in most people. But just to be on the cautious side, ODA says to seek medical attention if you believe a black widow took a bite.

To sum up the good news, the Ag Department concludes: “Most spiders in Oregon, even those most likely to be found in homes, are not known to be dangerous.”

That doesn’t mean we have to like them, though. Does it? (hh)


5 responses to “The good news about spiders”