The final link to Albany Station 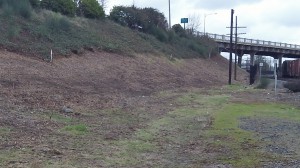 From here the path will run through the underpass right next to tracks.

The final element in Albany’s long-running project to restore and rebuild Albany Station is about to be added, if the Oregon Transportation Committee goes along.

The commission meets in Salem on March 20. It’s scheduled to act on a request to allocate $335,530 in federal grant funds toward the construction of a walking and bike path from the station underneath the Pacific Boulevard overpass to Swanson Park. The path is to be 600 feet long. Building it requires a retaining wall to keep the overpass embankment from sliding down. It also is right next to the Union Pacific main line, and the plans call for a fence between the path and the tracks, as well as lighting.

The overall cost estimate: $642,000. The city has grant money left over from other parts of the station project and will kick in another $60,470 in matching funds. That and the new money from the state, assuming the commission says yes, should cover the expense of the path, which then might yet be built this year. At more than a thousand dollars per linear foot, this bike and walking path seems kind of expensive. But the engineering and construction challenge of threading a path through that railroad underpass is substantial. So the price is understandable.

In the vision of Guy Mayes, the former public works employee who did tremendous work in spearheading the station planning over 10 years or more, the path is a crucial link between this transportion hub and the big neighborhood east of downtown. When it’s finally finished, I hope it gets lots and lots of use to warrant the expense. (hh)

Rhea Graham responds (April 5):  You’re kidding, right?!  Use the crosswalk, cross the street, walk under the overpass, cross the street and at the sidewalk, walk toward Swanson Park which is at the end of the very lovely bike/walking path.
This is an outrageous waste of funds and whoever approved it when there is total access to the park from there really should reconsider.  There are MANY ways this money could be better spent.