The endless possibilities of ‘may’ – Hasso Hering

The endless possibilities of ‘may’ 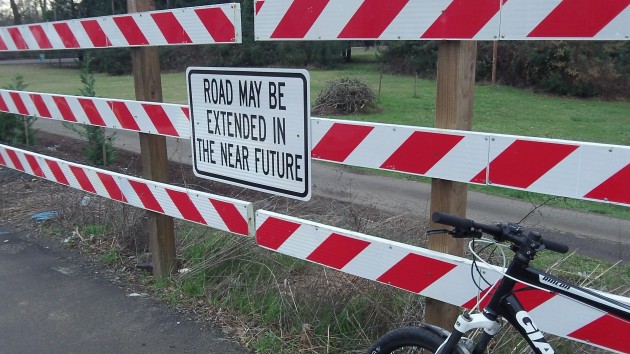 This sign is trying to tell us something, but what exactly?

“May” is a funny word. Very flexible. And vague. What it really means is “may or may not.” In other words, no information contained in it at all. That makes it useful when you’re trying to write a headline on a slippery story that doesn’t nail anything down. And apparently it’s useful for signs as well.

Take this sign, for instance. It’s at the end of a new street that leads to the rear of the new Bonaventure Senior Living complex in North Albany, off the west end of Hickory Street. On the other side of the barricade, and about 6 feet straight down, is Blossom Lane, an unimproved track off Highway 20.

So will this street be extended to Blossom Lane or beyond in the “near future”? Not a chance. It won’t be extended until and unless the property on the other side of the barricade is developed as some kind of subdivision. And at City Hall, they know of no plans by anyone to do so.

So why a sign that suggests something will happen soon when it probably won’t happen for a long time, if ever?

“The signs are part of our standard end-of-road barricade detail and have been for some time,” Albany transportation guru Ron Irish says. “My recollection is that the signs were added to the detail after a contentious development project. Neighbors complained during the land use hearing that they had only purchased their homes after someone with the city told them the road would never be extended. The council asked us to put something up at temporary dead-end streets to let people know the roads might be extended some day.”

They might. Or they might not. It doesn’t tell people anything. But everybody’s backside is covered in case there’s a complaint later on. (hh)

3 responses to “The endless possibilities of ‘may’”