The emperor has spoken 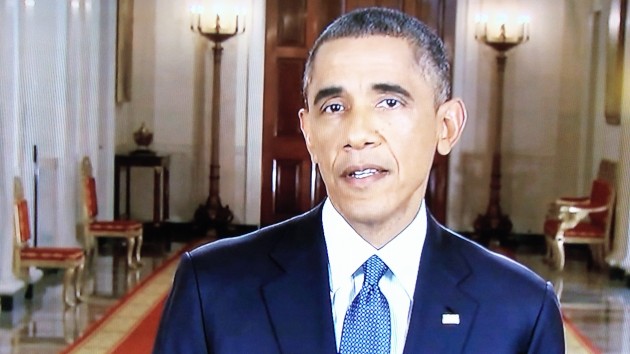 President Obama during his televised address on Thursday.

Would it hurt Barack Obama to at least try to look and act like the president of a republic instead of an emperor? Just look at what they now call the “optics” of his announcement on illegal immigrants.

On television the country sees a long corridor in the White House festooned in the furnishings and colors of imperial Rome. There’s the scarlet carpet on the floor, the classical lamps in the background, the gilded chairs with red cushions on the side. Into this picture, the man strides to let the country know what he has decided.

A president more attuned the constitutional processes of a free country with a separation of powers among three equal branches of government would not take that approach. He would not necessarily have to sit at a desk to address the country. But he would try to avoid acting or looking like he was appearing, Duce-like, on some balcony or rostrum to announce what he, by himself, would do.

So much for the appearance. What about the substance?

Obama said he would remove the threat of deportation from hard-working people who could prove they had entered the country without authorization more than five years ago. We are not deporting those people now. And obviously, if they are working to make a living, their immigration status does not prevent them from doing so.

The president didn’t even try to explain what was so urgent about this situationn that he had to act like Caesar Augustus to get it solved. (hh)


6 responses to “The emperor has spoken”