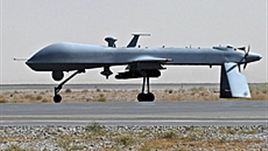 The Voice of America website carried this shot of a U.S. Predator drone.

The drone memo of the Obama administration is important, but not for the reason some senators and cable TV commentators say. Its main significance does not lie in the fact that the administration justifies the killing of American citizens who are leaders of al-Qaida or associated forces abroad. Of course the government is justified in killing people who are about to launch a violent attack on the United States if they cannot be captured, whether they are U.S. citizens or not. In fact it is obligated to do so. The situation is similar to a police officer shooting a criminal who points a weapon at him.

But the greater significance of the administration policy, written down in 2010 to justify taking out an American-born al-Qaida leader, is that it acknowledges we are in a war — a war! — against al-Qaida fighters. Obama’s officials have publicly downplayed the term “war on terror,” and the public may have been lulled into thinking that’s all over. But the drone strikes continue, killing al-Qaida leaders and others, including civilians and children in Pakistan and other places.

NBC News obtained a government white paper supplied to members of Congress that summarizes the policy. Here’s what this administration’s paper says: “The United States is in an armed conflict with al-Qaida and its associated forces, and Congress has authorized the president to use all necessary and appropriate force against those entities.” It says terrorist leaders can be killed if they pose an imminent threat of armed attack on the U.S. and can’t be captured, and if the killing is done with “applicable law of war principles.”

So, the laws of war apply because we’re still in a war. If Obama’s memo writers can admit this, he should too. (hh)