The deer and us 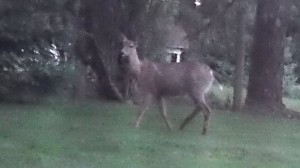 It’s no longer rare to look up from writing something and see a deer in the yard.

A book reviewer in the Wall Street Journal wrote that in this country it’s about as hard to see a deer as it is to buy gas. He had recently seen one, a deer that is, at the service station in his little town. The review was about “Deerland,” by Al Cambronne and published by Lyons Press. The book is about the interaction between deer and humans, and how the booming deer population has influenced everything from farming and forestry to public policy.

Around here, in Oregon’s mid-Willamette Valley, we are familiar with the conflicts that arise. Out of the corner of your eye you see a doe about to cross the road in front of you, and of course you slam on the brake. If you and the animal are lucky, you stop in time or it changes its mind and ambles back into the brush.

Then there are the birch saplings you bought and planted, and one morning you wake up to see them stripped of most of their leaves. Wire enclosures mean nothing to young deer, you discover. Still, you learn to admire the graceful way they can hop the fence from a standing start.

The populations of both deer and people are expanding, and near towns we humans shrink their habitat more and more. So we can expect conflicts to continue. It’s up to us to adjust. This means, among other things, slowing down on the drive home. (hh)