The day this snake lucked out 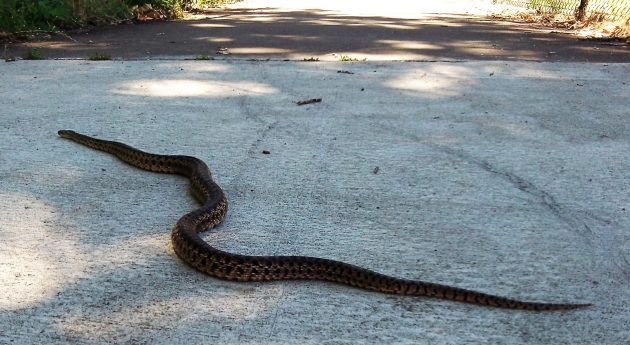 There’s an online fact sheet put out by the Oregon Department of Fish and Wildlife titled “Living With Snakes.” This fat little serpent, however, might benefit from something called “Living With Bicyclists.” Stretched out across the warm concrete of the Cox Creek Path on Friday, it was taking quite a chance. But it lucked out. I saw it in time and veered around it.

The photo above is cropped for dramatic effect. In reality, the snake’s length covered about one-third of the width of the path. That would make it between three and four feet long.

What kind of snake is it? The ODFW fact sheet says Oregon is home to 15 species of snakes. It has pictures and descriptions of each. None of the images matches my friend on the path exactly, but the one that comes closest identifies it as a gopher snake, also known as a bull snake.

One small doubt, though: ODFW says the gopher snake is sometimes mistaken for a rattler “due to its coloration and its impressive ability to mimic a rattlesnake by flattening its head, coiling, striking and hissing loudly. To complete the pseudo image of a rattlesnake, a gopher snake will vibrate the tip of its tail.”

My acquaintance on the Cox Creek Path did none of that. When I stopped the bike and walked back to get closer, the snake slithered away, but ever so slowly, without losing its dignity one bit. No coiling, hissing or vibrating its tail. And then it disappeared in the weeds.

You may have heard me mention that the riverfront beat I patrol on my bike is seldom quiet for long. And on the rare occasions when nothing else is going on, I’m grateful for any diversion, especially if provided by an Oregon snake. (hh)


3 responses to “The day this snake lucked out”