The day the sweeper comes … 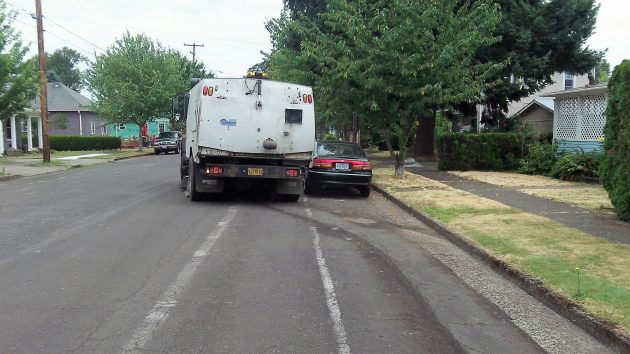 The Albany street sweeper steers around yet another obstacle on Thursday.

If you live in Albany and want the street in front of your house swept, you can get out a broom and shovel and sweep it yourself. Or you can check the schedule and make sure you don’t block the city’s sweeper when it comes around, like clockwork, at least once a month.

Unlike the neatness police in some cities elsewhere, the Albany City Council has seen fit not to prohibit curbside parking on the days when the sweeper makes his rounds. Presumably that’s because the council is considerate and doesn’t want to pile yet another requirement or rule on residents and taxpayers of the town. A one-day-a month parking ban would necessarily be violated because people would forget. Or they would just ignore it. Then there would have to be enforcement — tickets and fines. Who needs the hassle?

So it’s up to people to show a little foresight on their own. It’s easy. On its website, the city of Albany has published a street-sweeping map and schedule. On the map, you find the neighborhood where you live. On the schedule below the map, you learn the date when sweeping is done each month.

If you live in the Willamette Neighborhood, for instance, that puts you in Area C, one of 14 zones covering the city. The schedule shows that in July, the sweeping day was Thursday, the seventh. In North Albany, the Benton Woods subdivision is in Zone E, and this month the sweeping date is the 12th. And so forth.

The schedule also lists the 20 major streets where sweeping takes place every other Monday.

I don’t know how much Albany spends on sweeping the streets. The budget doesn’t say (or if it does, I couldn’t find it). The budget does list the expense of “sweeper debris” as $35,000, presumably meaning the bill for taking it to the dump. Speaking of debris, the budget says the city wants to “develop a sweeper debris recycling program.” Really?

Albany says it sweeps an accumulated total of 4,816 miles of streets a year. And so, if you want to take full advantage of this service, try to park some place other than the street on the day the sweeper comes. (hh) 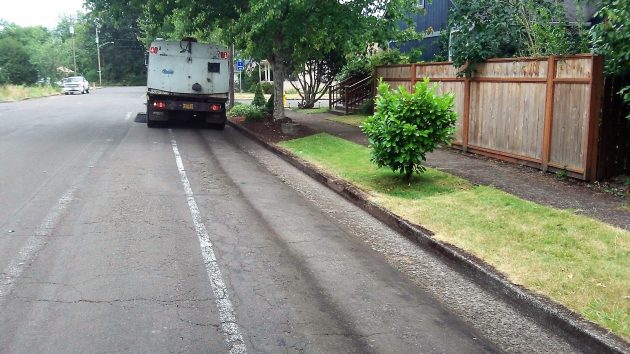 Clear sailing and a straight shot on this part of Front Avenue.


5 responses to “The day the sweeper comes …”