The crusades? A pointless comparison 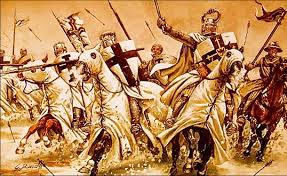 What do we know about the crusades? Almost nothing, I bet. So President Obama might have done everybody a favor with his ill-considered reference to events going back almost a thousand years. He caused some of us to try to refresh what we we read about in school — and in comic books about Richard the Lion-Hearted — many years ago.

The president’s remarks at the National Prayer Breakfast Thursday, about religion sometimes inspiring bad acts, were true enough but puzzling in the context of the here and now. “Humanity has been grappling with these questions throughout human history,” he said. “And lest we get on our high horse and think this is unique to some other place, remember that during the Crusades and the Inquisition, people committed terrible deeds in the name of Christ…”

People have committed terrible deeds throughout history, but that doesn’t mean we should not condemn and try to prevent terrible deeds done now. What we should not do is judge long-ago historical events from the perspective of civilization in the 21st century. We can recount the events, and in the case of the Crusades there are many different versions and opinions, but we can’t possibly understand what was in the minds of our ancestors in 1096, when the first crusade began.

The story is that through the Middle Ages, Christians were free to make pilgrimages to the Holy Land, controlled by Arabs since the seventh century. But in 1071 Seljuk Turks, who had taken much of Asia Minor from Byzantium, captured Jerusalem and began inerfering with Christian pilgrims. That’s what gave rise to a call, at the Council of Clermont in France in 1095, for liberating the sacred sites.

Over the century that followed, there would be four major campaigns to do so, with limited success and generally disastrous results. There were more crusades until the 1400s, but by the end of that century, the Holy Land remained in the hands of Muslims, Columbus had set sail for the new world and Europe lost interest in the Middle East. Still, as historian Bryce Lyon of Brown University wrote in an article for an ancient encyclopedia, “The crusades quickened the progress of western Europe by bringing profit and prosperity to Italian trading cities. They enriched European life in many ways.”

What happened centuries ago does not excuse the deliberate cruelty of the Islamic State beheading helpless people or burning them to death in 2015, and for the president to try to make a comparison was foolish in the extreme. (hh)


8 responses to “The crusades? A pointless comparison”