The cougar problem down south 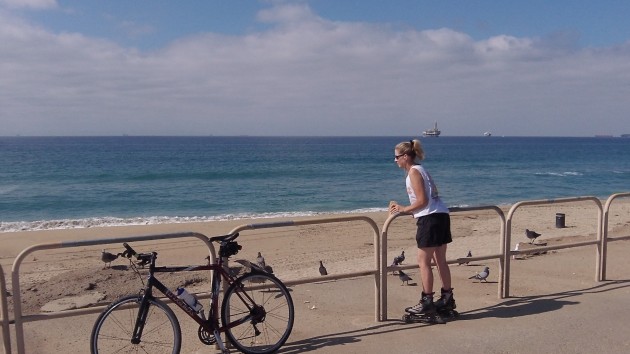 No lions here. She is feeding graham crackers to pigeons and beach chipmunks,

NEWPORT BEACH, CA — One of California’s problems we in Oregon don’t have is a shortage of cougars. The Orange County Register reports that the number of mountain lions in the county has shrunk to such an extent that the remaining animals are developing genetic defects because of inbreeding. Could Oregon’s cougar surplus become a source of help?

The county south of Los Angeles is so heavily urbanized is that news of any cougars there astonishes the visitor. But apparently there are enough wild lands left for a small population of cougars to hang on.Their problem is that the proliferation of highways and other development has cut their remaining habitat into smaller and smaller pieces.

It’s hard to think of anything to suggest that would improve the remaining wild lions’ chances of surviving, let alone multiplying. It’s not as though they are being hunted, let alone hunted with dogs. So Oregon’s solution, banning the use of hounds in going after cougars, is not available to the wildlife managers of Orange County.

But as for the cougars not being able to find unrelated mates, maybe the Oregon and California wildlife authorities could consider a resettlement program: Instead of killing unwanted cougars that have killed livestock or frightened residents, perhaps Oregon could catch them in live traps and transplant them to the few remaining cougar habitats in this Southern Caliornia county.

No, I’m not really serious. For one thing, I doubt California mountain lions would take kindly to strangers deposited in their shrinking territories. For another, more cougars in confined territories would almost certainly result in more housecats and other pets going missing, and in more sightings of hungry lions near schools where litte children are.

The last thing California needs is to borrow problems from Oregon, even if it could. Rather than too many cougars, in a place with millions of people and pets, it’s better to have too few. (hh)