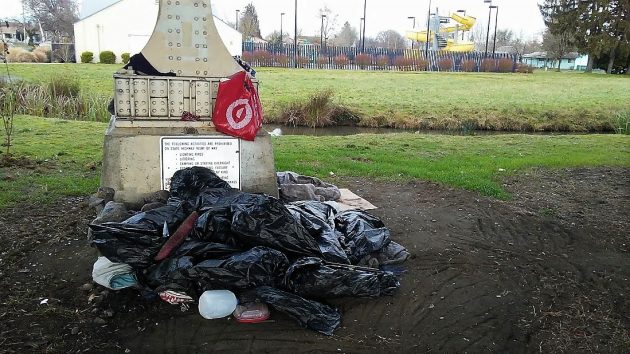 This was the scene under the Pacific Boulevard viaduct on Wednesday, Jan. 17.

The wasteland under the Pacific Boulevard viaduct is not exactly Albany’s garden spot. Vagrants have turned it into a dump where repeated cleanups have to be done.

The pile in the photo above was there last Wednesday. By the time I passed that way again on Saturday, it was gone and the ground was swept.

I inquired at City Hall, where Marilyn Smith in the city manager’s office told me that sometimes, the police department takes care of the cleanup and other times the city calls on the work crew of the Linn County Sheriff’s Department. In this case, though, she said it was the city’s park maintenance that got rid of the junk.

But then, here is a wide shot of the same area at mid-day on Monday: 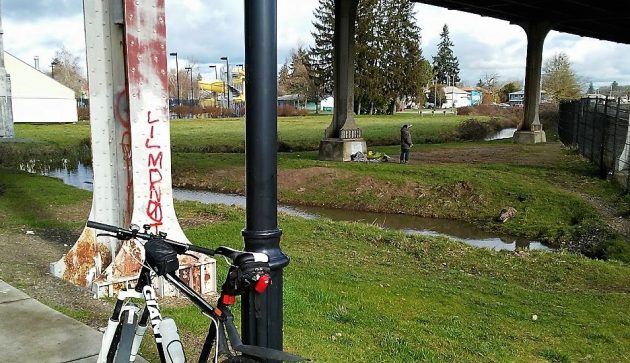 To be fair, though, when I retraced my route 10 minutes later, the guy had wandered off and all the stuff at the base of that pillar had disappeared. It looked as though the man had struck camp and moved on.

This is state right-of-way. Highways 20 and 99E pass right overhead. ODOT has posted signs: No littering or staying overnight. The signs have no effect. People camp there because they can, nobody drives them off, and except on stormy nights, the overhead road deck mostly keeps the rain away.

The local paper had a story about the idea of putting up communities of “tiny houses” as a way to tackle the Albany homeless problem. Published reports say that in Utah, they’ve had success with providing housing — apartments, not tiny houses — as a cure for homelessness. Whether it would also cure vagrancy, who knows?

In the meantime, our public agencies continue having to clean up. (hh)

3 responses to “The cleanup never ends”