The changing scene near Bowman Park 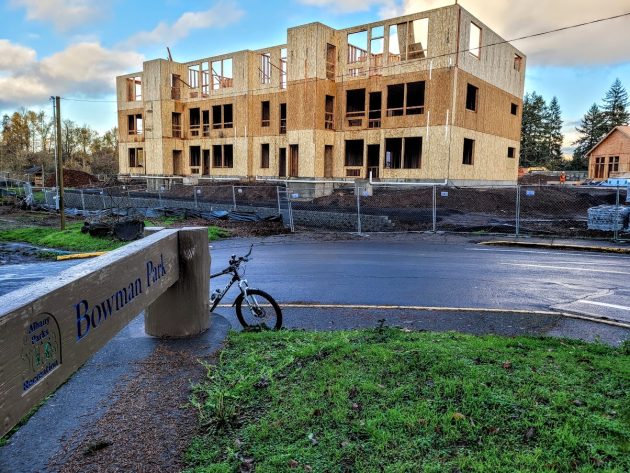 Here is The Banks’ Building No. 2, a 12-unit apartment building, under construction on Nov. 23.

If you haven’t been to Bowman Park in Albany since the summer, you may be surprised, the next time you go, by how the view at the entrance to the park has changed.

As mentioned here now and then, a Salem contractor, C.D. Redding Construction Inc., is building “The Banks,” a 120-unit apartment complex on the Willamette River at 595 Geary St. N.E. That’s across Geary Street from Bowman Park.

The first building to go up was the one-story clubhouse, to the right of the future entrance to the complex from Geary Street. Building No. 2, a three-story 12-plex to the left of the entrance, towers over the approach to the park.

The 120 apartments will be in eight buildings, two of them holding 24 units and the rest 12 units each.

Building permits on file at the city tell you a little about the amenities. Building 3, for example, which will look out over the parking lot bordering the riverbank and the Willamette River itself, will have 18 apartments with two bathrooms each, according to the plumbing permit. In the other six other units, tenants will have to do with one bathroom each.

Here’s something else you can tell from the building permits. The Salem developers of this project paid the city about $834,000 in fees and systems development charges. (Not counting fees for electrical and plumbing permits and other incidentals.)

Each of the individual permits for the buildings repeats some of the conditions for approval of the site plan. Among them: The development must set aside a 16-foot-wide easement for a multi-use path between  the riverbank and the complex.

The path, shown in the plans as 10 feet wide, will replace the unimproved dirt trail that now connects Bowman Park with Simpson Park downstream. Between the path and the parking lot on the land side, there is to be a strip of open space about 20 feet wide.

During the summer, an archaeological dig at the construction site stirred up a bit of interest. It was done by Willamette Cultural Resources Associates, with offices in Seattle and Portland. I asked about it by email. Eventually one of the principals in the Portland office emailed me back, regretting that because of state law, he couldn’t tell me what if anything they found.

Score another one for the transparency that Oregon often claims. (hh)


7 responses to “The changing scene near Bowman Park”