The Broadway pond: Following up 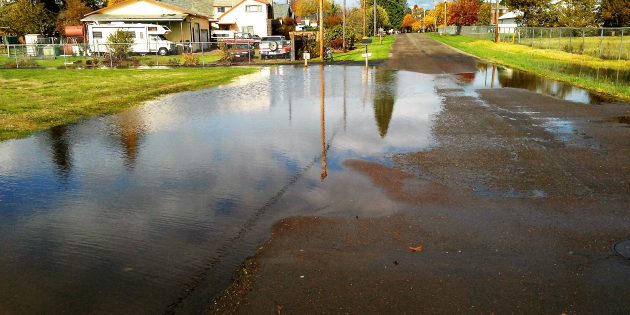 The Broadway Street pond on the afternoon of Oct. 27.

City and county officials have taken note of the water problem on Albany’s Broadway Street S.W., and they are trying to do something about it.

Neighbors say the ponding on a short section of the street, at the 2300 address, is new this fall. A couple of reports on the situation appeared here last week. Since then I’ve heard from Chris Bailey, the Albany Public Works director of operations, and from Linn County Roadmaster Darrin Lane.

I had been told that Broadway was a still a county road even though land on both sides is inside the city limits. Lane clarified the situation: “Broadway Street is commonly referred to as a county road,” he said in an email. “While the county does have a majority of the jurisdiction, there are two sections that are under the jurisdiction of the city of Albany.” He attached a map, and if the technology works, you can see it here: broadway-street-jurisdiction

As it happens, the ponding is in one of the city segments, according to the map.

Lane says the county wants to help figure out how to solve the problem. And if the ponding is caused by the collapse of a drain line that runs from there toward Queen Avenue, which seems like the most obvious cause, the Department of Energy would have a role in getting it fixed. The drain line is shown on maps I found in a 1983-84 health-physics assessment of the 14-acre “Back Forty” meadow of the federal Albany Research Center, which lies on the east side of Broadway. According to the report, the line was installed in the 1960s along with an extensive drain field in the vacant land.

Bailey says the city public works staff has been on the scene several times to deal with the ponding and have discussed it with the county. “From our discussions with the county, it appears that something has changed with the drainage on the DOE property that has caused the runoff to pool in that location,” she wrote in an email.

“While it’s not a city property or a city road (this was before she had seen Lane’s map showing city jurisdiction), we are trying to help and have spent a bit of time with our pump moving water away from the private property and into the city’s storm water system,” Bailey wrote on Monday. “We will be keeping in touch with the county and the DOE to see what can be done. It’s likely that we will be doing more pumping to try to draw down the standing water.”

When the rain resumes after Tuesday’s pause, the Broadway pond will likely rise again. So a permanent solution — restoration of a functioning drainage way toward the northwest — will become urgent again. (hh)

3 responses to “The Broadway pond: Following up”