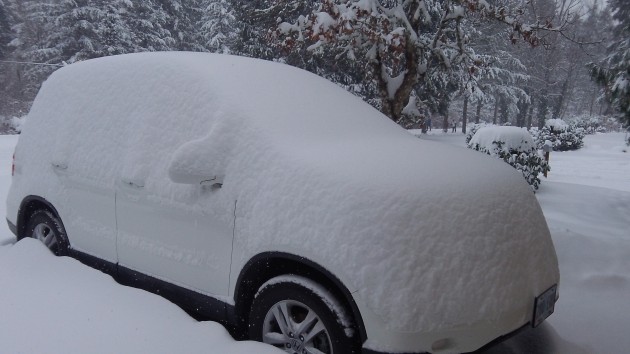 Leaving the car parked is easier when you don’t have to run out for groceries. 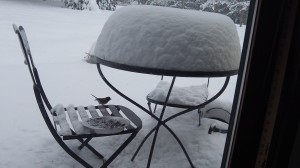 A visitor checks out an impromptu added feeder.

This winter storm may not become a routine event in western Oregon (we hope). Still, it is a useful reminder of what nature can do, and if we were not fully prepared this time, maybe we’ll do better from now on, or at least as long as we remember the Blizzard of 2014.

Food and heat are the most important things, assuming we have shelter to enjoy them in.

ODOT and local road authorities have asked people not to venture on the roads. This is easier if you are, one, unemployed and, two, not in need of groceries. The last time some of us laid in a plentiful emergency supply of edibles may have been in the days before “Y2K.” (If it’s still around, I believe that stuff is no longer good, by the way.) So now, we have to hope that the Weather Service is right and the snow will stop falling in a day or so.

As long as the lights stay on — and so far they have — now is also a good time to fully appreciate all the work Pacific Power did during the summer in clearing trees and branches above the wires. As long as the electricity keeps flowing, it’s easy to laugh at the frozen drifts and a foot of snow outside.

Let’s remember, too, that most of our power supplied by Pacific is generated in Wyoming, where they burn coal to generate the steam that drives the turbines. So when the Obama administration and its supporters do everything they can to stop coal from being mined and used — in a misguided and vain attempt to prevent “climate change” — they are making it more likely that we’ll freeze in the dark in the winters to come.

As for heat, we can thank Providence and the engineers who developed “fracking” and the other techniques that have made natural gas much more plentiful in North America than it appeared just a few years ago. There was a time when Northwest Natural was seriously planning to import liquid natural gas in order to augment the domestic supply. Those days are gone, and consumers in these suddenly frigid latitudes are getting the benefit.

A word about wildlife, mostly birds in this case because except for a couple of deer that jumped the fence and ran across the yard at dusk last night, our furry friends must have curled up somewhere. The birds, though, are crowding around the feeders. So let’s make sure to keep them fed. (hh)