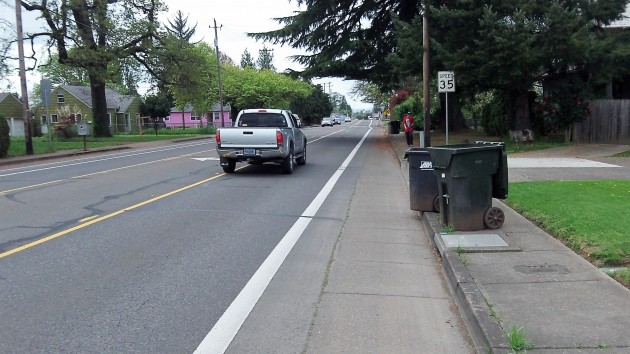 The west-bound Salem Avenue bike lane was clear Monday, but the sidewalk wasn’t.

Where to put your garbage and recycling cans on the weekly trash day is a perplexing and occasionally vexing question without a universal solution. Luckily, it doesn’t matter as long as everybody realizes there are no easy answers and acts accordingly.

Placed in the bike lanes, trash cans may force cyclists out into traffic. Put the bins on the sidewalk and you’ll interfere with pedestrians and may even completely block somebody who uses a wheelchair. Balance them in the parking strip, they’re likely to tip over. And once the trucks have come by, the cans they leave behind are never in exactly the same spot anyway.

This came up during Monday’s work session of the Albany City Council.  Jim Lawrence and Tim McCloud of the city’s Bicycle and Pedestrian Advisory Commission talked to the council. A letter to the council from Lawrence summed it up with this heading: “Roadway Safety Hazard – Obstacles in Roadway Travel Lanes.”

What to do? “It will require education and engineering with enforcement as a last resort,” the letter said. “We are asking you to appoint a committee to draft policy for council’s approval that would address and eliminate the problem.”

Council members were not inclined to go as far as to make a new law or get the police involved. They pretty much agreed that talking about the issue, making residents aware of the potential for accidents and such, and relying on people’s good sense were the way to go.

Because of the great variety of conditions on Albany streets – sidewalks or none, parking allowed or not, bike lines or no lanes, parking strips, ditches or gutters, and so forth – writing a regulation would be as hopeless as trying to enforce it.

And as for trash cans in the bike lanes, I’ve never found it difficult or dangerous to slip past them on my bike. One requirement: Keep your eyes out front and look where you’re going, which is pretty much the same advice whether you’re on the road or in a bike lane, on two wheels or behind one, or even if you’re on foot. (hh)