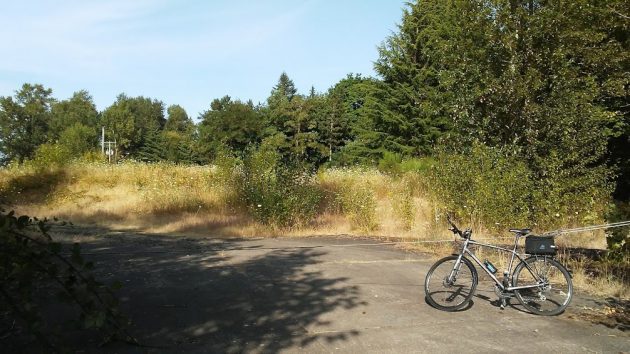 The site of “The Banks” apartment proposal on Friday afternoon: A land-use fight may develop here.

The Albany City Council has refused to waive the fee that neighbors have to pay to make their case against “The Banks,” a proposed 120-unit apartment complex on the Willamette River.

This came up at the end of Wednesday’s council session. Because it was a virtual meeting and the issue had not been on the agenda, it took me till Friday to catch up with the gist of it.

In short, it goes like this: In July 2019, the planning commission approved a site plan and related permits for 105 apartments on the river across Geary Street from Bowman Park. This year the developers, Willamette River View Holdings II of Salem, applied to change the layout and increase the number of apartments to 120. The planning staff approved the change on July 17.

The next day, July 18, a neighbor, Mary Abraham, e-mailed the city council to complain that according to the city development code, modifications of approved plans must be handled in the same way as the original approval, and staff approval now is not the same as planning commission approval last year.

Now, in order to have their concerns addressed, the neighbors have to file a formal appeal, and for that, the city charges a $303 fee. “Therefore,” Abraham wrote, “I am asking that the city council waive the appeal filing fee to ensure the planning commission reviews this modification request.”

Abraham, who lives on Willamette Avenue less than a block from the apartment site, meant for the council to hear her request under “business from the public.” When it came up, Councilman Dick Olsen made a motion to grant the request and waive the fee. But Councilman Rich Kellum argued against it, and Olsen’s motion got no support.

The planning staff got letters from 40 people about the request to expand the apartment complex before the staff went ahead and approved it. All 40 have standing to file an appeal. As of Friday, no appeal had been filed. The deadline is 5 p.m Monday.

So by Tuesday we’ll know whether the neighbors scraped together three hundred bucks so they can tell the planning commission why eight three-story apartment buildings would be too much for their low-key neighborhood of modest houses and unimproved streets. (hh)


13 responses to “Waive fee to appeal? Council says no”