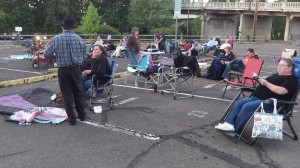 Oscar Hult (in hat) chats with guests as the audience gathers. 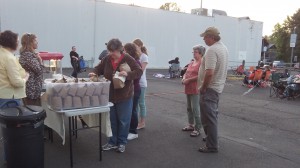 Not yet dark enough for the movie: Time to load up on supplies.

Old movies still apparently attract a crowd, even when — or perhaps especially when — they’re shown outdoors, projected on the side of a building.

For about 10 summers now, on Friday nights the Albany Downtown Association has shown “Movies by Moonlight” on the wall of the Eagles Club downtown. To watch, people are encouraged to bring lawn chairs and arrange themselves on the parking lot behind Cappie’s Brewhouse. Oscar Hult of the Downtown Association says each showing draws about 150-175 people.

Three showings remain this summer: the 1937 comedy “Nothing Sacred” with Carole Lombard on Aug. 9, Vincent Price in “House on Haunted Hill” from 1959 on Aug. 16, and Elizabeth Taylor and Mickey Rooney in “National Velvet” (1945) on Aug. 23. Refreshments are on sale; admission is free, and donations are accepted. This year’s sponsors of the shows are the Pix Theater, Pacific Power and Cappie’s Brewhouse.

I had known about this program before, of course, but Friday night I saw people gathering before the start of the show when a late bike ride took me down Water Avenue. I stopped, and Hult filled me in. (hh)