That’s supposed to be safer? 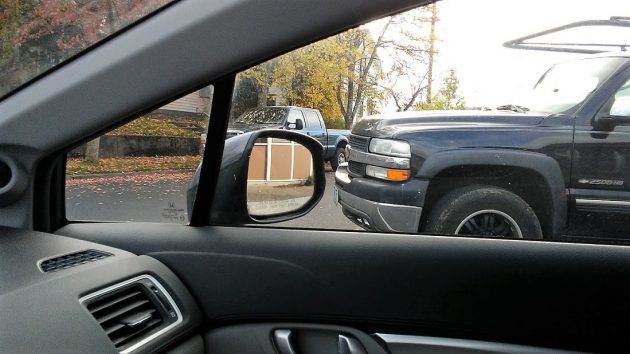 See anything coming? No? I didn’t either and almost got clipped by a passing rig.

At the risk of beating a dead horse, remember the reason why Albany city officials imposed back-in parking on Second Avenue outside the post office?

It’s safer, they said. You can see traffic coming before you pull out, as opposed to not being able to see traffic when you back out of conventional, head-in angled spaces, they said.

It’s as though the people making that claim had not driven a modern vehicle in years.

The photo shows what happens in real life. In actual traffic, there are different vehicles. Some are compact cars that are low to the ground. Others are big, like vans and pickup trucks. Vehicles of recent vintage also have backup cameras mounted at their very tail ends, many of them anyway.

In a little car with a backup camera, you can back out of a diagonal parking space and the camera’s wide angle will spot oncoming traffic long before you can see it. Also, as soon as your backup lights come on, oncoming traffic can see that you are preparing to back out.

But with back-in parking on the left side of the street, as in front of the post office, in some situations the whole front end of the car has to poke out of the space and into the traffic lane before the driver can see around the obstruction to his right. Good thing that there isn’t all that much traffic there, most of the time. For it surely isn’t safe to pull into traffic blind. (hh)


14 responses to “That’s supposed to be safer?”