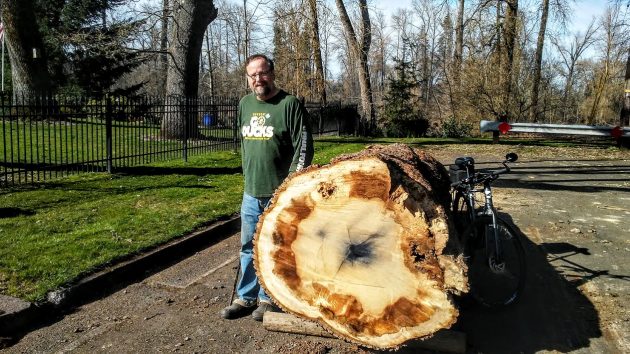 For now, a huge Oregon white oak log rests on the north end of Albany’s Oak Street near the Willamette River. It’s an impressive piece of wood.

The oak was felled by a gust, before the ice storm that followed on the weekend of Valentine’s Day, on the riverside property of Rolland K. Brower. The crown stretched across the end of the street, and the limbs were sawn off in due course.

Over the weekend, Brower posted a Facebook report showing how, with the help of neighbors and two pickups and a long steel cable, the biggest chunk of the massive trunk was winched out of his yard on improvised wooden rollers.

On Monday’s bike ride, I saw the trunk sitting there and stopped to take a closer look.

Brower has measured the big log — about 4 feet across at the base — and estimates that it weighs 8,000 pounds, give or take a few pounds. He says somebody is interested in milling it.

The question now is transport. He thinks it will take flatbed truck — a crane too, probably — and is working on arrangements to get it done.

How old do you think this tree was? Some time ago, another old oak on the property came down, and they counted the rings but lost track after 150.

This one is bigger. So Brower figures its age at 200 years. (hh)


6 responses to “That’s some big oak log, lying there”