That’s not art; how to fight back – Hasso Hering

That’s not art; how to fight back 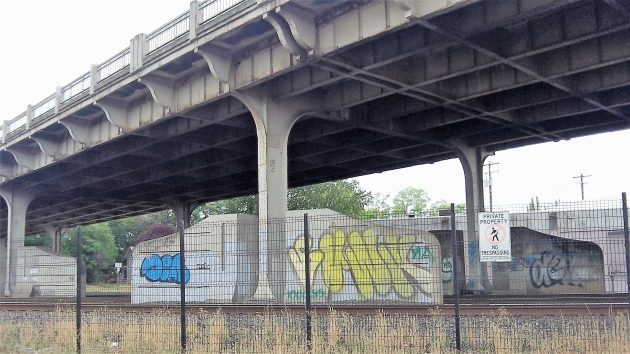 Big, colorful and ugly: Graffiti under the Pacific overpass on Sept. 1.

Albany doesn’t have as big a problem with tagging as some other places — yet. But the splashy display that recently showed up under the Pacific Boulevard overpass makes you worry about what’s next.

Whoever defaced those concrete barriers — barriers apparently intended to protect the bridge pillars in the event of a derailment — faces a risk of prosecution. It’s not a huge risk, because taggers are hard to catch. But it’s real nevertheless, and Albany police have proved resourceful in going after vandals of this sort.

I had wondered whether Albany had ever prosecuted graffiti vandals. City Hall spokeswoman Marilyn Smith refreshed my memory:

“Yes, we have prosecuted graffiti artists and will continue to do so when we can catch them,” she wrote in an email. “The most recent case was in 2015; Officer John Trantham arrested a young man on several counts of criminal mischief. He also faced charges in Corvallis and rural Linn and Benton counties. APD caught him tagging the underside of the 53rd Avenue bridges after installing a trail cam down there.”

Turns out there’s a state law against “unlawfully applying graffiti.” The law (ORS 164.383) makes it a Class A violation and says a court may punish offenders by imposing a fine plus up to 100 hours of community service. The community service, the law says, must include erasing the graffiti “created” by the offender or someone else.

Graffiti vandals presumably do their spraying when nobody is around to watch, probably at night. (How they can see well enough to pull off their intended designs is another question.) But as the 2015 investigation showed, the vandals can no longer count on remaining unobserved.

Trail cameras! Outdoor stores advertise these wildlife spying devices. And you’ve probably seen the images — nocturnal creatures doing their thing in the woods when they sense no human beings near. These cameras seem like ideal tools in the fight against taggers.

So from now on, let those louts with spray cans worry about trail cameras hidden under bridges and anywhere else there’s a big blank wall. And since boxcars are the taggers’ frequent targets, rail companies might find a use for this kind of deterrent as well. (hh)

4 responses to “That’s not art; how to fight back”