That was quick: Flooding fixed 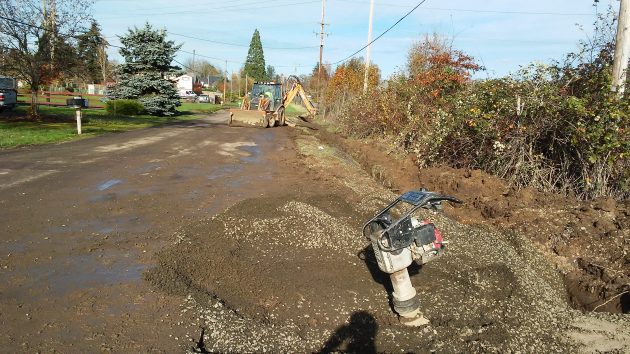 You will be relieved to hear that this is likely to be the last report on the great Southwest Broadway Street flood of 2016. Why? Because once Albany officials became aware of the problem, the city jumped into action, spent some days pumping away the ponding runoff, and on Thursday was finishing work on a permanent fix.

The problem was that this fall, runoff from the undeveloped acreage of the U.S. Department of Energy east of the street was inundating the street and a neighboring driveway, then flooding properties to the northwest. Apparently an underground drainage pipe shown on maps from the 1980s had become clogged or collapsed. The solution was to pipe the water about 150 feet to an existing city storm drain to the south. From there it can flow into Oak Creek and the Calapooia River.

Chris Bailey, public works director of operations, told the city council about the plan on Nov. 7. Ten days later it had been carried out.

The city also had planned to check whether the water coming off the Department of Energy land contained any contaminants. “We asked the DOE for test results of the surface water runoff but they do not have any, and have not been required to do any sampling of their runoff,” Bailey told me in an email this morning. “My staff is going to collect some samples and compare (them) to other sites.  We don’t expect to find anything unusual, but if we do, we will let the DOE and DEQ know.” (hh)


5 responses to “That was quick: Flooding fixed”