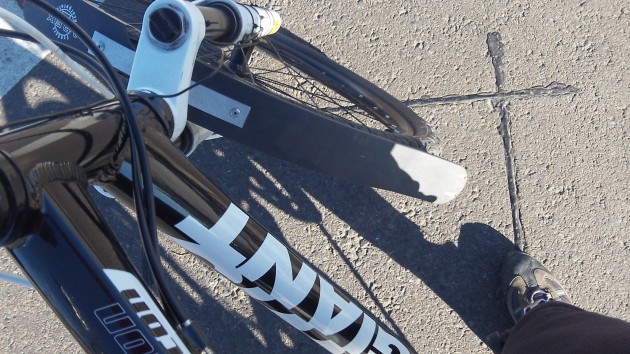 Standing on this bike loop, you have all the time in the world to take a photo.

This is a small thing, really. But it still bugs me. I’m talking about those traffic light sensors in bike lanes that don’t do anything. Those wire loops in the pavement are supposed to activate the traffic signals for cyclists when no cars are present. Maybe they do this some of the time, but in my experience they usually don’t.

A good place to test this is the signal, installed last year, at Oak Street and Ninth Avenue in Albany. The signal will be needed after Lowe’s builds its planned store on that corner, which is supposed to happen in 2015. Until then, there’s not much traffic on Oak, especially on weekends.

So if you ride your bike to the intersection from the south on a Saturday, say, hoping to cross Ninth with the light, you are out of luck. You can stand right on top of the loop, lean your bike left and right, and wait. You’re going to wait until a car comes along and stops beside you.

When I mentioned this issue in a story on Oct 18, an Albany reader said motorcyclists sometimes have the same problem. And from Minnesota came the news that it’s legal there for cyclists to cross against red lights when it’s safe, which seems like an eminently sensible idea.

What I’m wondering is why those bike lane loops are still being installed. It’s been pretty well established that they don’t work all that well. So why go to the expense of putting them in? (hh)