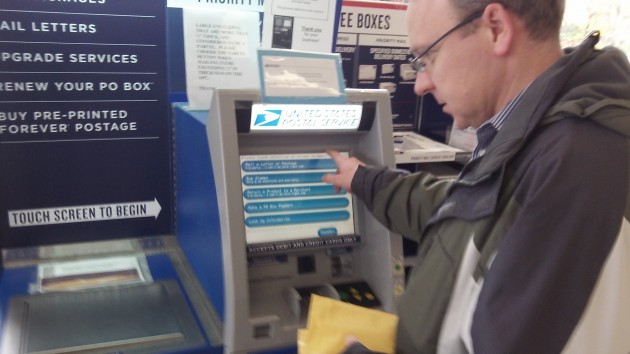 Touching the screen as instructed didn’t this customer.

As far as computer-operated machines are concerned, the mail kiosk at the Albany Post Office seems to be overwhelmed or on the blink more often than one would expect in this digital age. I’ve had occasion to point this out before, but the glitches seem to recur or persist.

When it is working, the kiosk is a great help. I have been impressed, for example, by the system’s ability to identify a particular address in a town across the country if you supply only the ZIP code and the first letter of the street. That amazing ability was not, alas, on display on Monday afternoon. Instead, the screen told customers that “I cannot help you at the moment,” or words to that effect.

Maybe Monday afternoon is a bad time at post offices nationwide. Maybe customers were demanding service from every automated kiosk from sea to shining sea, all at the same time, causing the system to crash. Too bad. Because in Albany the line of people having postal business of one kind or another stretched out the lobby door.

What does a customer do if he doesn’t want to stand in line? He jumps back in his truck and drives the mile or so to the contract post office in the Carriage House Plaza, where not one but two smiling young women were just waiting to take my parcels and send them on their way. (hh) 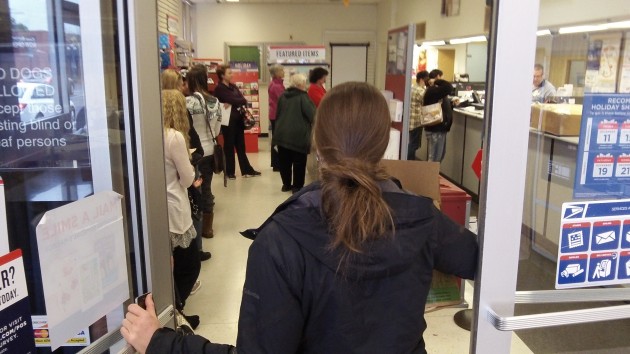 Long line at the post office Monday while the automated kiosk didn’t work.