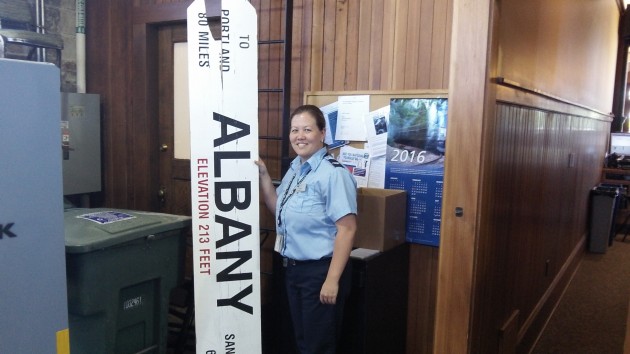 The case of the roof sign missing from Albany Station was not a great mystery but, alas, a case of incomplete reporting.

In early May I happened to notice that the “Albany” sign was missing on the side of the depot’s roof that’s facing west. What happened to the sign, I asked the city of Albany, the owner of the building. They didn’t know but said they would endeavor to have a replacement made and installed. The story appeared here on May 11.

What I should have done instead was to ask somebody at the station, which I finally got around to doing on Friday. Any idea what happened to the sign that used to be on the roof, I asked Lori Komp, the agent who staffs the station on Fridays. Sure, she said. It broke off during the last snow storm we had.

She had me go around to what might have been the store room for baggage, back in the day. And there was the sign, seemingly bigger than it and its twin look when they’re up on the roof where they belong.

So now it’s just a question of either fixing the breaks in this thing and putting it back up, or getting a new one made. Is it a matter of life and death? Hardly, but the public spent millions getting the historic depot building restored, and the old signs are needed to complete the authentic look. (hh)