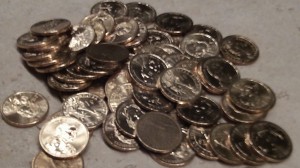 Maybe we could solve all our economic problems by just revaluing these cheap dollar coins. Let’s call them a million dollars each or, what the heck, a trillion!

Just how nutty our economic situation has become is shown by the idea of the trillion-dollar coin. Nobody with any sense except a few columnists — and they are paid to write nutty stuff sometimes — gave this notion any credence. But then on Monday our lone Oregon Republican in Congress, Greg Walden, introduced a bill to ban to this trick. And if the bill fails to get anywhere, which is likely, it will seem as though this crazy scheme actually had come political backing.

The idea, in case you missed hearing about it, is to make use of a law from the 1990s that allows the Treasury to produce certain coins for collectors. The Obama administration would order the production of, say, two or three trillion-dollar coins made of platinum. Then it would deposit them with the Treasury. And suddenly the government would have — on the books anyway — enough money to keep meeting its debts even if Congress refuses to raise the debt ceiling, which it will have to do some time in February or the government will be forced to default on payments due.

The debt ceiling itself may be a stupid law. If Congress has approved spending that requires borrowing, then why does it need to vote again on repaying the money it borrowed? But the platimum coin scheme is so patently ridiculous as a way around the ceiling that not even Obama would attempt it. It would be a like a public scam, a fraud openly committed. If the government could create money that way, then why doesn’t is just mint 300 million million-dollar coins and send one to each American. Then everybody’s problems would be solved, and nobody would care about the unemployment rate. Our man Walden didn’t do himself any favors by sponsoring a bill to try to stop what nobody in his right mind would attempt. (hh)

From Warren Beeson: In your commentary you mention that Congress should raise the debt ceiling to pay for things they approved.  I agree.  However (and I’m not certain exactly how this applies) the (Democrat-controlled) Senate has not approved a budget in at least three years.  In other words, they have not approved spending as required by law.  So first they don’t do their legally mandated job; and then they refuse to recognize the spending debt they are  illegally accumulating and correct that by cutting spending or raising the debt ceiling.  Nice work if you can get it.