Nice paving job — and wide too! That was my first impression Wednesday of the newly rebuilt segment of Riverside Drive just outside of Albany. On the bike, the wider road really makes a difference, even before the lane markings are installed.

To refresh your memory, Knife River has a $1.9 million contract from Linn County to widen and repave Riverside Drive from Oakville Road to Meadow Road, a distance of 2.4 miles. The contract has a completion date of June 22, and judging by the progress so far they’ll make it.

As part of the job, a sharp curve in the road has been made rounder. Should prevent some crashes, I would guess.

The county eventually intends to widen Riverside south all the way to Highway 34, connecting to the off-highway bikeway there. That will provide a safer bike route from Albany to Corvallis on the Linn County side. Benton County is still trying to figure out how or when it might be able to build an Albany-Corvallis bike route, off Highway 20, on its side. (hh) 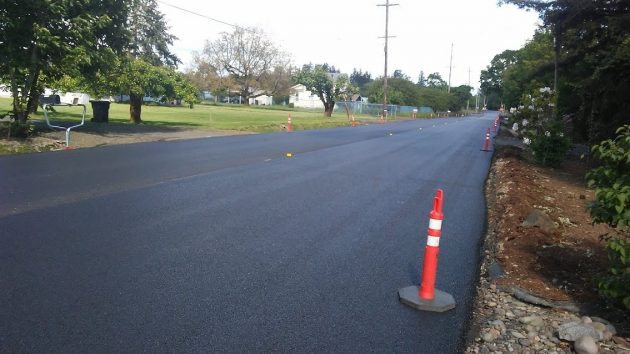 The new and wider pavement on Riverside near Oakville Road on Wednesday.