Tennis at West: Moving the courts 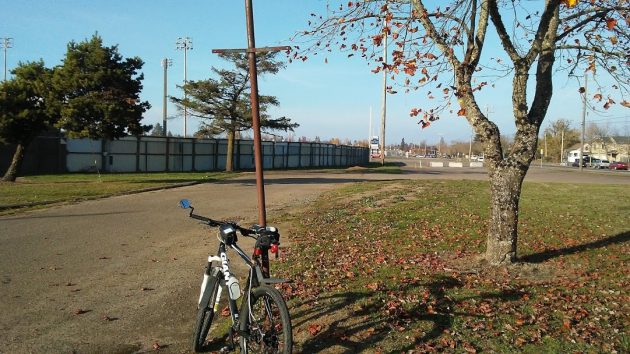 Between the baseball field and Elm Street is where West Albany High now proposes to move its four tennis courts.

This may be of interest if you play tennis at West Albany High School, as a student or, outside of school hours, a member of the public.

Greater Albany Public Schools has filed a request to modify a conditional use permit for the remodeling and expansion of West Albany High. The school’s new auditorium and related structures will take up the space where the four tennis courts have been.

Originally, the school proposed to build new courts on the south side of the West-Memorial-Liberty school complex, on a grassy area just east the Liberty Elementary parking lot on 24th Avenue. Now, the revised plan would put the new courts at the corner of 24th and Elm Street, just outside the outfield fence of West’s baseball field.

The obligatory 10-foot cyclone fence would enclose the courts to corral most errant returns. There would be a planted swale between the Elm Street sidewalk and the fence, presumably to hold runoff from the courts when it rains at lot.

I wondered about the reason for the change. Russ Allen, the GAPS business director, responded: “The school asked the architects to look at relocating the tennis courts. Relocating them preserves an existing soccer field and minimizes the impact on Memorial Middle School’s playfield. The space at the southeast corner of the site takes advantage of an under-utilized space and connects to the existing parking field adjacent to the stadium and baseball field.”

The $53 million project to add 91,000 square feet of interior space to West Albany High was planned to go to bid this month, with contracts to be awarded in January. Construction is to take place from March 2019 until completion in the summer of 2020.

So for about a year and a half starting next spring, tennis players accustomed to using West’s courts will have to find somewhere else to play. Or take up pickle ball. Or golf. (hh) 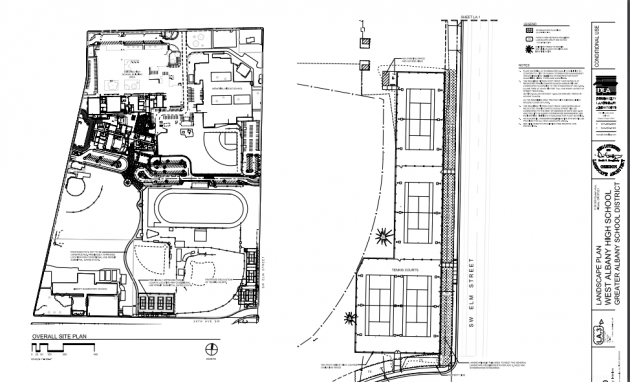 Drawings submitted to Albany Planning show both the formerly and the newly proposed locations of West’s planned tennis courts.


6 responses to “Tennis at West: Moving the courts”