Tennis anyone? At LBCC, rarely 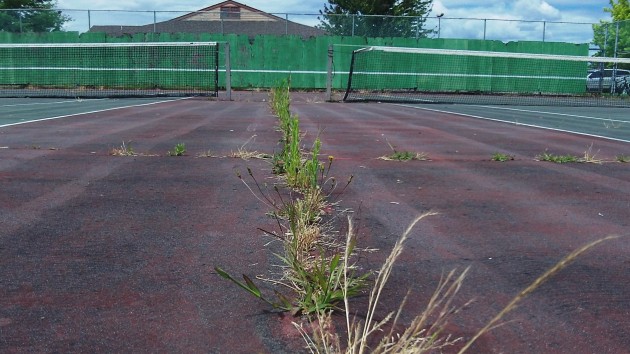 Over the weekend I happened to ride past the tennis courts at Linn-Benton Community College, and I was sad to see the shape they were in. But the Albany college says something’s about to be done about the weeds.

As you can see, the weeds sprouting from cracks in the concrete are not the only issue. The nets could stand some attention too. And the plywood practice wall looks like it outlived its usefulness some time ago.

I inquired about all this, and college spokesman Dale Stowell looked into it Monday morning. He’s the college’s director of advancement and marketing. He learned that the maintenance department plans to attack the weeds and clean them up in another week. But there are  no plans to replace the nets.

Let us acknowledge here that LBCC has issues more pressing than the tennis courts. It is asking voters for approval this fall of a $34 million bond issue to make major improvements at the Albany campus as well as in Lebanon and Corvallis. One main goal: Updating its capacity to educate a capable workforce for tomorrow’s jobs in changing industries.

The problem with the courts is that interest in tennis has dropped. The college no longer offers classes in the sport, and while the courts are open to the general public, only three to four times a week does anyone actually play there. (That sounds plausible. If the courts were constantly in use, the weeds would have no chance to grow so tall.)

It goes without saying, then, that LBCC fields no tennis team. Until recently reviving baseball, the college had teams in only two sports, women’s volleyball and men’s basketball. Now, to avoid a Title IX problem, it is looking for a second sport for women.


2 responses to “Tennis anyone? At LBCC, rarely”