It’s not as though Albany’s Talking Water Gardens just sits there, minding its own business and tolerating the odd cyclist pedaling along its trails. No, it evidently requires a fair amount of maintenance to keep it looking like a natural landscape and performing the water-cleaning job for which it was built.

For example, on Tuesday afternoon this cyclist came across two crews deployed against different kinds of vegetation. One was taking a lunchtime break from clearing the weeds along the verges of miles of paths. The other was preparing to do battle with the dreaded water primrose, also known by Ludwigia, its botanical name.

I’d never heard of either name, but this apparently is bad stuff if you like running water. It’s an aggressively invasive aquatic plant that can form dense mats along lake shores and ditches. At the Water Gardens it would eventually, if left alone, prevent treated wastewater from flowing through the ponds and being further cleansed as intended.

There appear to be about 75 species in the genus Ludwigia, and I’ve no idea which one is causing trouble by keeping the garden’s talking waters from being sufficiently chatty. But the stuff obvious has to be killed and removed lest the gardens choke up. (hh) 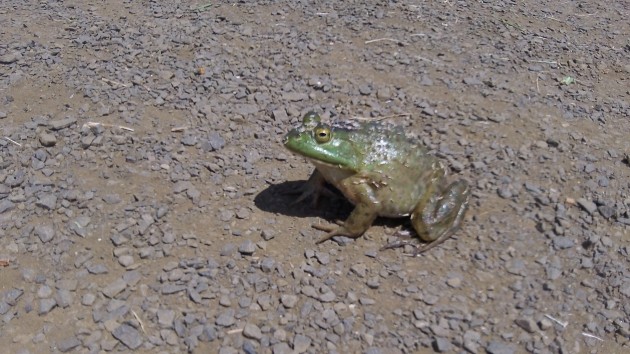 Out of his element, this resident of the Talking Waters was sitting in the middle of a gravel path.