Talking Waters: A little mystery and some news 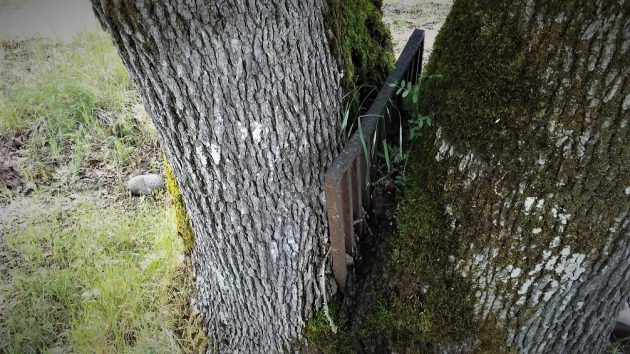 This is an oak with three trunks, trunks that have grown around what looks like a storm sewer grate. The question is: How come? How did it get there?

This oak, as it happens, is in the Albany-Millersburg Talking Water Gardens.  Taking a wild guess based on the size of the trunks, it’s probably between 75 and 100 years old. It obviously predates the construction of the Talking Waters, a system of clarifying and cooling ponds, completed in 2012.

How did that piece of iron end up wedged in there so the trunks could grow up around it? Now it’s become part of the tree and there’s no way to pull it free.

Maybe a worker at the nearby Simpson mill leaned the grating there during some construction project in the middle of the last century and then forgot about it? Nobody said, “Hey, where did that grating go? It was just here a second ago.” And somebody just went to the warehouse to get another one to put over the drain so nobody would fall in?

Or, somebody stuck it there in, say, the winter of  ’43 to see how long it would take for the oak to swallow it up? He checked on it every few years and put his observations in a journal. But then he died, and the journal was tossed because no one could tell what the all those cryptic entries meant?

Or, perhaps the oak was just a sapling coming up through an abandoned storm drain and took the grating with it as it kept growing up and around it?

None of those, probably. But it’s the sort of thing that once you’ve seen the thing and taken its picture, you wonder about — for minute or two.

And it reminds you of a bit of actual news regarding Talking Waters: In Albany’s lawsuit against CH2M-Hill over the design of Talking Waters, a panel of the 9th Circuit has backed up the city’s point that the litigation must be handled in Linn County as the city’s contract provided.  CH2M had tried to have the case heard in federal district court in Eugene, whose district includes Linn County. But the appeals court said that no, “in Linn County” means what it says. It does not mean “in Eugene.”

So barring more procedural appeals, the case will be handled in state court in Albany. This litigation has a long way to go, but perhaps not as long as it takes an iron grating to become engulfed in a mighty oak. (hh)


3 responses to “Talking Waters: A little mystery and some news”