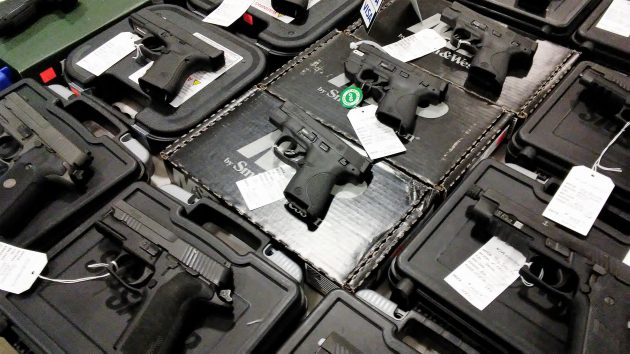 Merchandise on display at a gun show at the Linn County Expo Center on March 4.

Guns are on the minds of Oregon legislators again this year, judging by the number of bills introduced so far. Some would relax the restrictions on gun transfers and have no chance with the Democratic majority. Others would tighten restrictions or add new ones.

Forty-two bills in the hopper mention the word “firearm.” One in particular caught my attention.

Modeled after laws already adopted in California and Washington as well as Connecticut and Indiana, Senate Bill 868 would allow courts to issue “extreme risk protection orders” when they determine that a person presents an “imminent risk, or risk in the foreseeable future” of committing suicide or harming others.

Family or household members could apply for such orders, and judges would be required to act on them that day or the next. The orders then would require the persons named to give up any firearms or ammunition they had. If they didn’t, the police would come and seize them. The gun owners could ask for a hearing later to challenge the orders, which otherwise would be in effect for a year and could be renewed. Falsely accusing someone of posing an extreme risk would be a crime.

The bill is a new version of a proposal that died last legislative session. This one has more safeguards to try to protect due process and discourage the making of phony complaints. Before issuing an order, judges would have to consider several factors such as whether the person has a proven history of threats, violence, substance abuse or cruelty to animals.

It’s not unreasonable to want to disarm violent or despondent men — presumably mostly men — especially those who are liable to attack members of their households. On the other hand, how’d you like to be the cop who is told: “There’s this guy who his wife says is mad as hell and prone to do something rash. So go to his house and collect his guns.”

The bill is pending in the Senate Judiciary Committee. Republican Brian Boquist of Dallas and Democrat Ginny Burdick of Portland introduced it. Before taking up the measure, though, committee members might inquire how similar laws in the four other states have worked out. It would be hard to establish whether any tragedies had been averted. But at least lawmakers ought to find out how often these orders had been sought and granted, and whether there had been any cases, despite safeguards, of the laws being abused. (hh)