Takena Landing to get new dock 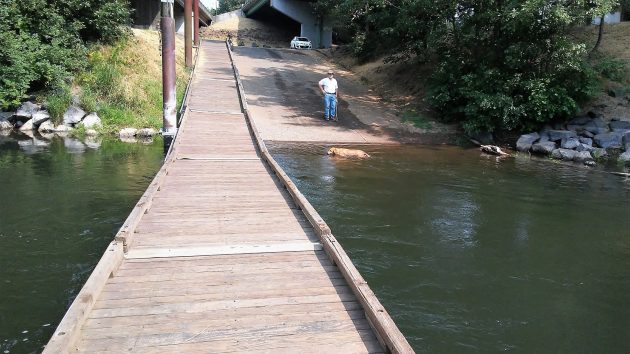 A dog cools off at the Takena Landing dock on Aug. 11.

To the casual observer the wooden floating dock at Albany’s Takena Landing doesn’t look as though it’s in bad shape. But it’s going to be replaced next spring, and the new one will have a fiberglass deck.

Albany received a $118,000 grant from the Oregon State Marine Board. The grant covers most of the estimated $151,300 cost of replacing the dock, according to the resolution accepting the grant passed by the city council on July 24. City park funds will cover the rest.

Why replace the thing? Gary Carlson of the parks department told me the dock is more than 20 years old, having last been replaced after being damaged by high water in 1996. He said the Marine Board recommended that the city apply for the grant money to replace it again.

The floating segments of the new dock will be made of aluminum, with decking of pultruded fiberglass. (Look it up; pultruded fiberglass is a material that can be made into just about any shape.) Carlson says the decking material will reduce weather damage and the possibility of slipping.

The parks department expects the new structure to be shipped in November. The department will install it after the seasonal high water in the spring of 2018.

The new dock will have the same shape and be put in the same place as the one that’s there. I’m no kind of expert, but I think the location is not the best. The dock pokes into the river at a right angle to the strong current, making launching small craft kind of tricky. I once managed to have the current swamp my canoe at the Takena dock, dunking me and all my stuff.

On second thought, maybe it wasn’t the current as much as clumsy navigation by the man in the canoe. (hh) 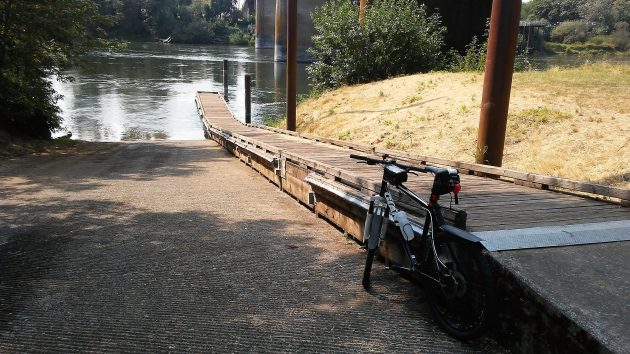 On a ride, I stopped at Takena Landing to take a look at the dock.

You can get a sense of the current in the video below: