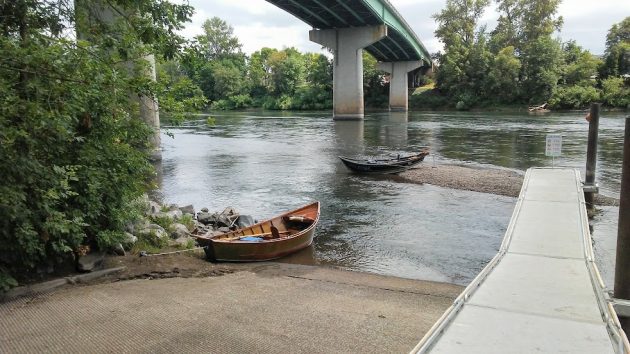 The Takena Park boat ramp and dock on the afternoon of July 1.

Launching and retrieving boats at Albany’s Takena Landing Park has become a bit more complicated this summer. Low water in the Willamette River has exposed a gravel bar blocking the end of the ramp, and there may be underwater obstacles as well.

City Manager Peter Troedsson mentioned the situation to the city council in his regular weekly summary last Friday. There was concern that the gravel bar might interfere with any fire department rescue operations if an emergency developed on the river in that vicinity.

The city had contacted the Marine Board, but it wasn’t clear what if anything that agency could do. If any dredging was contemplated or authorized, doing the job presumably would be up to the city, an unlikely prospect given the city parks department’s overstretched maintenance budget.

On  a bike ride Monday, I detoured through the park to take a look. Two men were taking out their drift boats, and one of them told me they didn’t have any problems getting in to the ramp around the bar.

Today I heard from Albany resident David Cross, who mentioned the gravel bar and added, “I also noticed some of the two-hundred pound rip-rap boulders brought in to stabilize the bank below the ramp have now taken up residence in the bottom of the small constricted pool where an unsuspecting boater might make an untimely discovery.”

He suggested that boaters be warned about the boulders.

With a grant from the Marine Board, the city installed a new dock at the Takena ramp in the spring of 2018. But even without the added gravel bar, launching a boat can be a challenge there because of the strong river current running at right angles to the dock.

For less experienced boaters, and craft with a deep draft, Bowman Park may be a better choice. (hh) 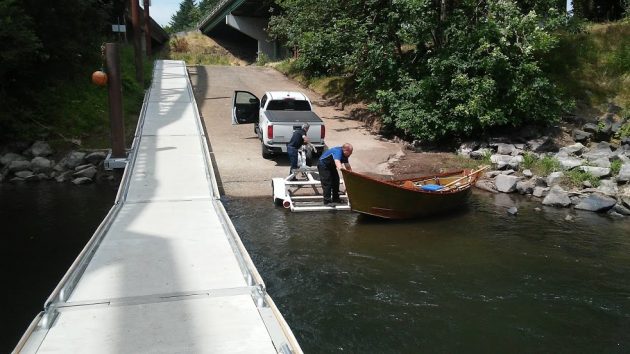 Getting a drift boat on its trailer at Takena Landing on Monday afternoon. 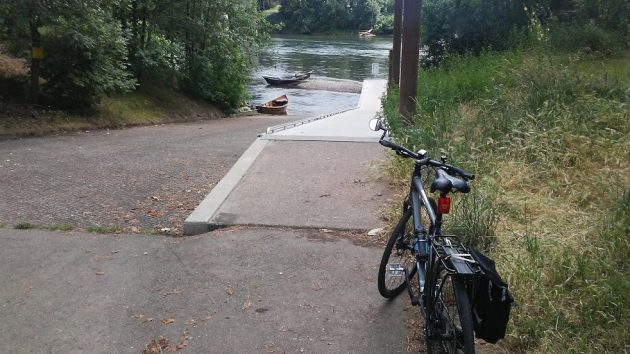 It’s a long way down to the river at Takena Landing this July.


4 responses to “Takena Landing: A gravel bar and boulders”