Take the lane, those symbols say 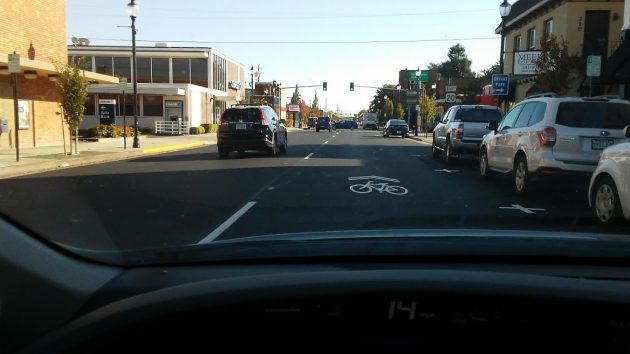 One of the sharrows a driver sees on Ellsworth Street downtown after crossing the bridge.

“They must be kidding” was my thought when I first laid eyes on this new symbol in the middle of the right-hand travel lane of Albany’s Ellsworth Street downtown. But they’re not. Kidding, that is.

They indeed want bicyclists to take the middle of the travel lane, where those “sharrows” have been painted.

“They” are the City of Albany and ODOT. Sharrow is a contraction of share and arrow. And ODOT’s Oregon Bicyclist Manual explains the symbol on the pavement this way: “It’s provided to show bicyclists where to ride on streets without bike lanes and to indicate to motorists where to expect bicyclists. It is placed along a line of travel that avoids opening car doors.”

Ron Irish, the city street and traffic expert, told me the sharrows on the downtown couplet of Highway 20 had long been advocated by Albany’s Bicycle and Pedestrian Commission and are included in the city’s transportation systems plan.

“Bike lanes are generally preferred in situations like this,” Irish wrote in an email, “but there’s not enough room on Lyon or Ellsworth for marked bike lanes. Because Lyon and Ellsworth are part of the highway system, ODOT had to approve the change.”

Now that ODOT has finished resurfacing the two streets, it is adding the sharrows. As of Monday, the painted symbols were in place on about half of Ellsworth.

On the bike, I’ve tried to avoid Ellsworth and Lyon because of the traffic and parked cars. Now, encouraged by the sharrows, I might try riding in the middle of the lane just to see how that works out.

Another place where there’s no room for a bike lane is the Ellsworth Bridge itself. If the sharrows are the answer, the bridge is where they should be painted next. (hh) 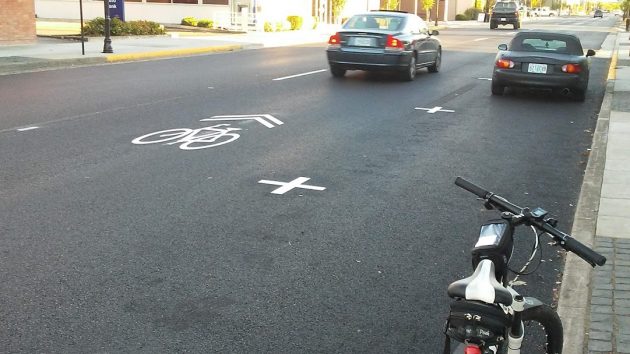 Contemplating a sharrow on Ellsworth from the safety of the sidewalk.


11 responses to “Take the lane, those symbols say”