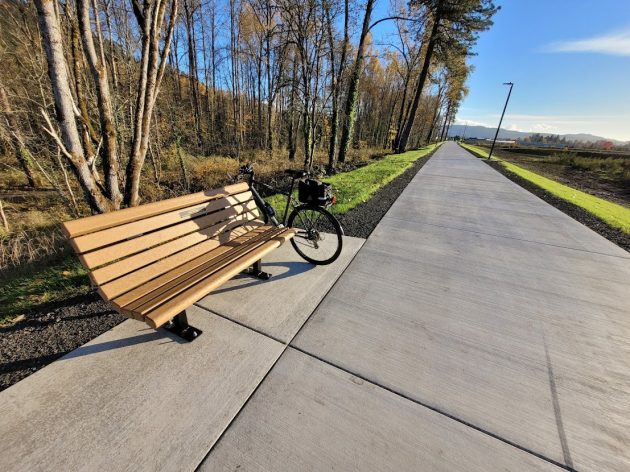 The new Old Mill Trail in Lebanon has beautiful pavement and benches too.

In the paper Tuesday morning I read about a new off-road trail in Lebanon, so in the afternoon I trucked the bike over there to try it out. For walkers, runners, and people on bikes, it’s a beautiful thing.

This concrete pathway, 11 feet wide, is only about a three-quarters of a mile long, but on the south end it connects to the extensive trail system around Cheadle Lake. Along the way there are benches and, in case darkness falls while you’re there, well placed LED fixtures to light your way.

It’s the work of Build Lebanon Trails, a nonprofit group of volunteers that has been working for a couple of decades on a plan for a network of 50 miles of walking and cycling paths around town. A little plaza about halfway on the Old Mill Trail lists the names of supporters and donors who made it possible.

The best place to reach this trail is to drive out Grant Street to Gill’s Landing, where there’s plenty of day-use parking, along with some spaces for RVs, not to mention a spectacularly clean public restroom where everything works.

From there you can stroll or bike south, sometimes within sighs of the South Santiam River, toward Riverview Park.

Here’s about seven minutes of the Old Mill Trail as I experienced it Tuesday.

As you may be able to tell, for November it was a spectacular day. (hh)