Take a last look at this ‘tunnel’ 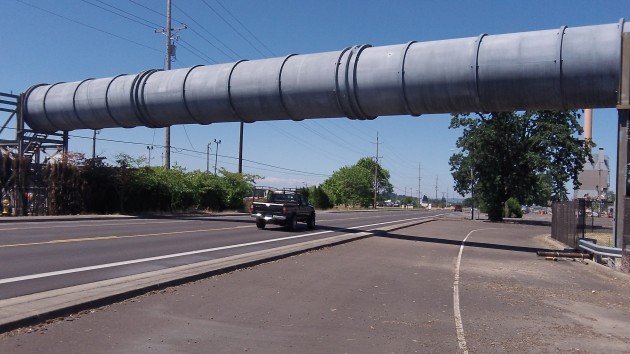 This is another mid-valley sight that’s about to disappear along with what’s left of the Albany Paper Mill. It’s the overhead tunnel on Old Salem Road that used to hold a massive array of piping and other gear connecting a cogeneration plant on the west side with the mill proper on the other side of the road.

Frontier Industrial Corp. filed for — and the Linn County Road Department issued — a permit to close Old Salem Road underneath the structure for Wednesday and Thursday, June 24-25, for the purpose of demolition. The permit application was filed by a representative of the demolition contractor whose telephone area covers part of Houston, Texas.

The road closure is scheduled from 7 in the morning until 7 at night both days. There was no indication of a designated detour, but Millersburg residents can probably figure out how to get to Albany and back using I-5.

The cogeneration plant had been installed when the mill was owned by Willamette Industries. Only the tunnel itself remained on Monday as the generating machinery was removed earlier. Almost all of the formerly massive mill has also been turned into scrap by now. In May, when I last took a look at the site, a spokesman for Memphis-based International Paper told me demolition would likely be finished in July and the mill site would then be ready to go on the market for sale this summer.

International  Paper closed the mill in December 2009 with the loss of 270 jobs. (hh) 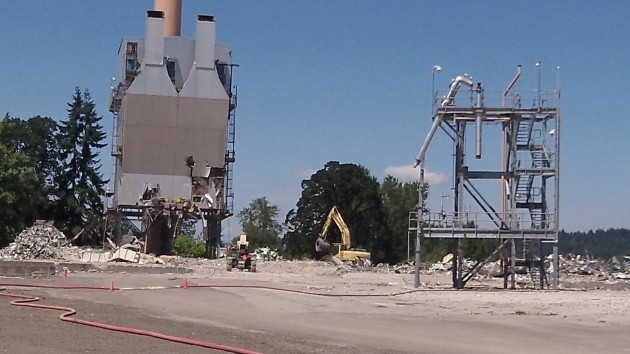 This is supposed to be gone by the end of July, a company spokesman said in May.


7 responses to “Take a last look at this ‘tunnel’”